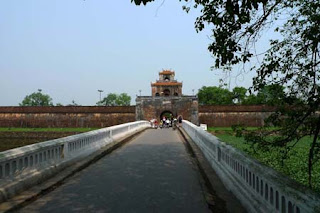 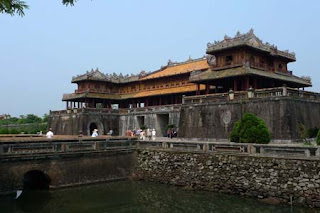 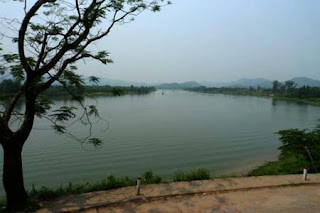 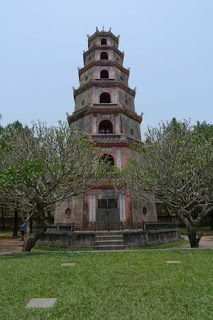 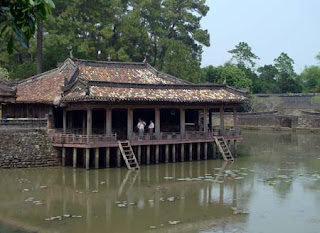 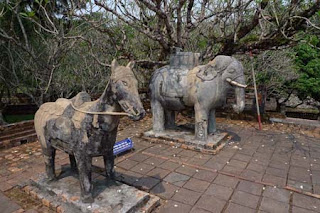 It's been nice to head south, away from the wet or freezing weather of China, Japan and Korea, but now it's gone the other way – it's too hot!

From Da Nang, I took the ship's tour to the refined Imperial capital of Hué – about a 2 and a half hour drive from the ship. At Hué, Vietnam's extravagant Emperors built an enormous Citadel, based on the Forbidden City in Beijing, surrounded by an enormous moat, and a huge wall that was a whopping 20 metres thick, and then filled it with opulent palaces and colourful pavilions.

Unfortunately, Hué was also a scene of one of the bloodiest battles of the Vietnam War, which meant that much of the Imperial City was sadly destroyed. Inside the walls, where once there'd have been scores of magnificent palaces, there were now just green fields – although the four or five palaces which did manage to survive the fighting, and have since been restored, do give a hint of just how impressive this place would have been. Of course, a huge portrait of the much-revered (and omnipresent) Ho Chi Minh, looms over the main gateway into the Citadel, just to remind you that this Imperial extravagance is a thing of the past (the Last Emperor abdicated in 1945).

From here we went to the Mausoleum of the Emperor Tu Duc – the man who allowed (or was powerless to prevent) the French to move in on Vietnam, and who was more concerned with creating monuments than protecting his people. It must be said that the Mausoleum that he created for himself is a fantastic sight – nestled in pine-clad hills, its many moss-covered pavilions set amongst tranquil reflective pools. At the mausoleum, the slightly melancholy and dilapidated atmosphere was lifted by a school party of hundreds of noisy kids who were desperate to say "hello".