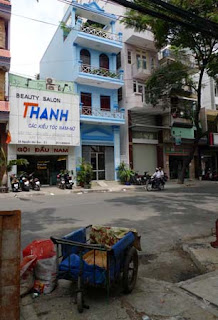 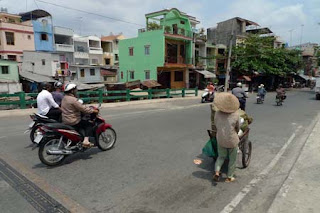 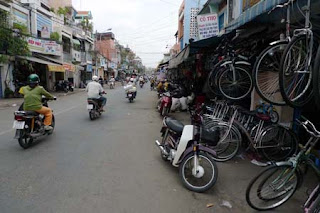 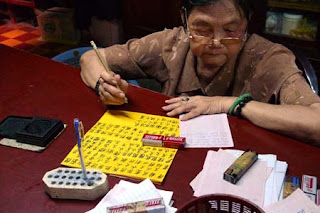 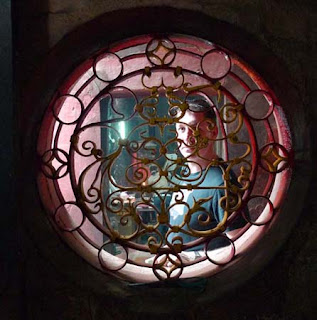 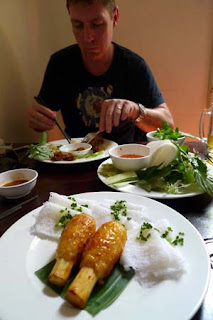 From the centre of town, we decided to walk to one of HCMC's most famous Chinese temples, the Jade Emperor Pagoda. The heavy humidity meant that we were sweating buckets, but it was nice to walk through a section of town that we hadn't explored before. As we walked, it was obvious that free enterprise is alive and well in this Communist country – the lines of busy motorbike and bicycle repair shops on one road went on forever. It's nice to see a society where they still recycle everything (although out of necessity rather than ecological reasons), and where it still makes sense to repair something, rather than replace it.

We arrived at the temple, where the air was thick with pungent smoke from the many joss sticks, and we saw lots of ornate statues and vivid woodcarvings of people's descent into hell – looking incredibly similar to paintings of the Last Judgement from Medieval Europe. Outside the temple, there were two ponds – one alive with tortoises scrambling over each other's backs, and another, where people come to release goldfish. At the temple entrance, vendors are helpfully selling goldfish to the worshippers – presumably they scoop up all the fish that have just been released, ready to be sold again. More recycling in action.

All this walking and sweating meant that we had worked up a decent appetite, so we went to our new favourite restaurant, Quan An Ngon, for some more delicious street food in a refined old colonial building. As ever, we ordered way to much, and as ever, we managed to plough our way through the whole lot.

Our final task was to get rid of our last Dongs with some retail therapy, but we felt it was too hot to deal with the hassle of the Ben Thanh market, so we went to the air conditioned mall instead. The mall is almost as full of knock offs as the market, but it was a more pleasant environment to do our haggling. I don't think we're very good at haggling – the vendors either seem disgusted at the low prices we offer and won't even engage in any haggling, telling us to go away; or they bite our hands off at our first offer, and we're left with a nagging sensation that we've paid well over the odds.

Anyway, we've fallen in love with Vietnam all over again. We don't know when we're going to be coming back here next, but it will be interesting to see how much it will have changed – will it be full of skyscrapers and shopping malls like the Chinese cities we've visited? Or will it become seedy and over-touristed like parts of Bangkok? Hopefully neither.