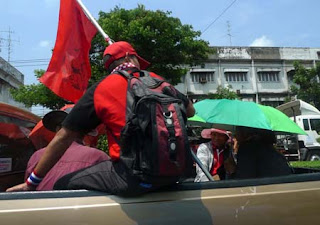 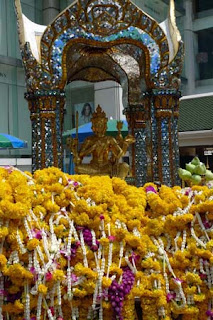 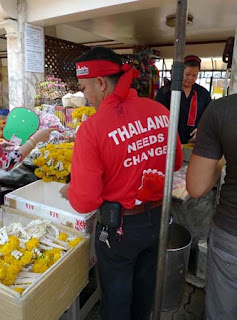 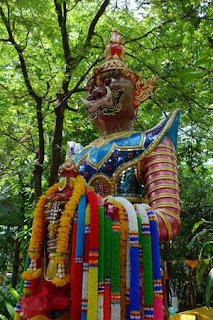 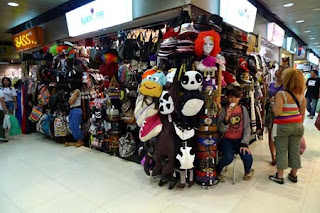 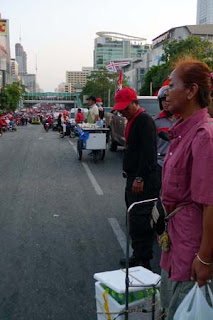 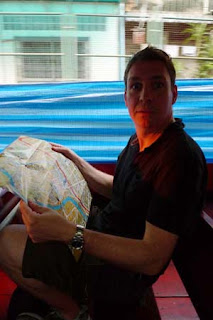 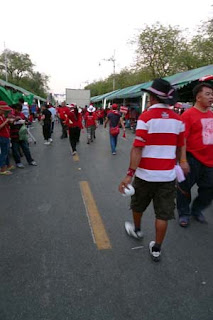 Well, the city isn't revolting, but the people seem to be planning a revolution.

In my lecture yesterday, I told people about the current political unrest in Bangkok, and advised them to stay away from the political demonstrations that are currently beginning to paralyse the city. Unfortunately, I didn't really heed my own advice, and twice today we found ourselves right in the middle of the protests, surrounded by thousands of red-shirted demonstrators and uneasy-looking riot police looking on from the sidelines.

The protests are trying to get the Parliament dissolved, because they feel that the current government were put in place by illegal means. The red-shirts are mainly from the poorest sections of society and from the countryside, while the yellow-shirts who make up the government's supporters, generally come from the urban middle and upper classes.

The current round of protests have been going on peacefully for the past few weeks, but in the last couple of days, things have heated up, as the red-shirts have decided to set up barricades around Bangkok's upmarket shopping area, and to bring the city to a standstill. For a city that's almost always in a state of constant gridlock anyway, that's not too hard a task – today the traffic was hideous, and the crowds were huge, which combined with temperatures just below 100 degrees, you got a sense that it wouldn't take much for things to boil over.

So, into this combustible situation, stumbles the supposedly travel-wise Destination Lecturer and his wife, oblivious to the risks involved. We decided that the best thing to do was to ignore the situation and carry on regardless, so we kept to our planned sightseeing route. We first went to the much-revered Erawan Shrine, which just happened to be right next to the main speech-making stage of the demonstrators. So, we took our photos of the shrine trying to zone out the deafening rabble rousing speeches, and the frenzied cheers of the crowds, and we then walked as quickly as possible away from the epicentre, to our next temple, about 500 yards away.

This temple, Wat Patum, was a tranquil oasis of calm in amongst the tumult and roadblocks going on in the streets outside, and so we sat in the temple's peaceful garden trying to plan an activity that didn't involve a re-enactment of the storming of the Winter Palace or the Peasant's Revolt.

So, we went to the Pratanam Market – a wholesale clothes market, where we were told that there were bargains galore. It was refreshing to find a clothes market which wasn't full of the usual fare of cheap knock offs, but instead was full of original designs. Unfortunately for us, the original designs, were mostly made for the locals, who are not only much smaller than us, but also seem to prefer very short skirts and brighter colours than our conservative 40-something tastes.

Our next bright idea, was to go to the Thai Boxing stadium, for a night of controlled rather than uncontrolled violence, so we got a river bus down one of the narrow canals, and emerged from the water, right into the second epicentre of the demonstrations, where red-shirted people were flocking to from all directions. In fact, the atmosphere wasn't really menacing – it was like a cross between the Glastonbury Festival (Woodstock for Americans), the pre-match atmosphere of a big football match, and the peaceful bit before the anti-globalisation riots take off. However, the fact that they all dutifully stood to silent attention while the National Anthem was played, was quite reassuring.

In spite of this, we decided that the most prudent thing to do, would be to get the hell out there – easier said than done. Traffic was at a standstill, so it took an age to find a cab, and then we had to get him to agree to take us to the other side of town. After a lot of cajoling, we went on our way, to find that every street we wanted to go down was roadblocked – it must have taken half an hour to finally find a way out of there, in which time we were beginning to think we'd never make it out.

But, eventually we escaped, and he took us to our target restaurant, evocatively named "Cabbages and Condoms". In spite of the bizarre name, it was a standard Thai restaurant, which had the theme of promoting birth control and safe sex. Anyway, it was a lovely meal, although Tracy's tofu curry almost blew her head off.