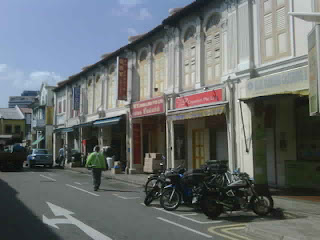 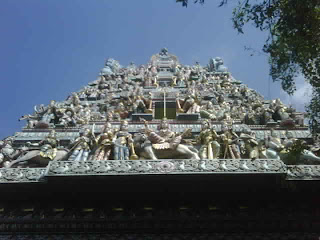 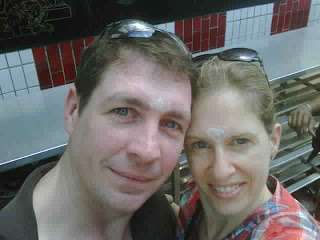 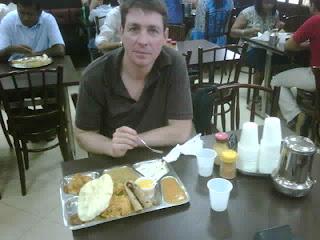 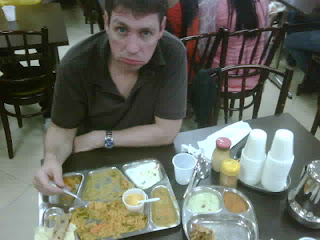 So, today we leave the ship after 2 months of boiling weather, freezing weather, and now boiling weather again. We've seen some fantastic places, eaten way too much great food, walked the Great Wall, seen the Terracotta Warriors (just lucky Tracy), been part of the revolution in Bangkok (by mistake), and seen monkeys dressed up like prostitutes - who could ask for more from a trip?

We had about 5 hours in Singapore before our transfer to the airport, so we decided to go to Little India, and sample the British national dish - curry. Little India is one of the more atmospheric parts of Singapore to explore - with its smells and sights, you could almost imagine that you were back in the Sub-Continent, if only it weren't so spotlessly clean.

We went first to the colourful Hindu Sri Veeramakaliamman temple, where lots of people were praying devoutly and getting blessed. As we watched, one of the priests beckoned us over, and annointed us with some white powder on our foreheads, telling us we would be '"double lucky" today.

Tracy then fell in love with India, and decided we were going to move there, and went all ethnic with her retail therapy, buying bangles and toe rings. Then we came to the main event - a curry lunch. We went to a restaurant full with locals, and I had an enormous vegetarian biriyani, with popodoms, chapatis and 4 different dishes, while Tracy had a veggie dhosa, with lots of dips to smother it in. It was way too much food, but somehow we managed it - fantastic value too, at about £5 for the 2 of us.

Having eaten all this food, we weren't up to any more sightseeing, which was just as well because we had to go to the airport 6 hours before our flight leaves. So, we have just spent the last 5 hours in a lounge, using their wifi and drinking Tiger beer.

Feeling a little dehydrated as we wait to board the plane......