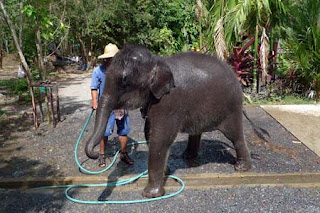 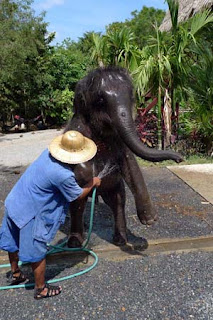 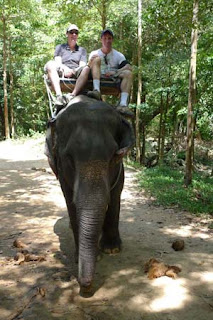 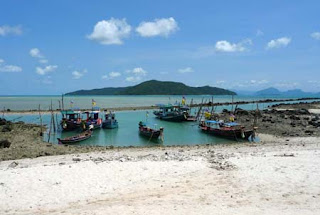 Ko Samui is an island paradise of white golden beaches and laid back resorts, but, not having the skin for a day of lying on the beach, I opted for the "eco safari", where we would get to ride an elephant in the jungle, and see some monkeys.

The elephant ride was good, although it was a lot more bumpy and uncomfortable than I remember from my last elephant ride (am I getting old?), and then we ended up at the place where they do the animal shows.

Unfortunately, the Thais seem to think that Westerners like seeing wild animals perform demeaning tricks, rather than just giving them a showcase for their incredible skills and intelligence. The elephant show wasn't too bad, although the deafening europop backing track and hideous ringmaster bellowing out indecipherable inanities made you feel pretty uneasy about the spectacle of dancing baby elephants. Even so, they seemed well looked after, and the elephants were incredibly cute.

But, then we went to the monkey show. My heart sank when I saw the monkeys dressed up in ridiculous spangly dresses, and I could scarcely believe it when I saw that the female one had been made up with face powder and lipstick, to look like a simian geisha – who in their right mind would think it was a good idea to make a monkey look like a badly dressed prostitute? The show was fairly degrading and the monkeys looked pretty unwilling to take part – it was all quite depressing. Tracy has refused to demean the monkeys further, by showing you pictures of them looking stupid and miserable.

Anyway, we moved on, everyone pretty taken aback by this "entertainment", and we went to have lunch in a restaurant in a beautiful spot overlooking the sea, the hot weather cooled by lovely sea breezes.

I did a bit of exploring in Na Thon, the town where we were anchored off (a fairly scruffy-looking, but laid back place), and I spent my last baht on a couple of cheap T-shirts.

Tonight, we had the White Party – an outdoor sensory overload of thumping music, laser lights and toned men in skimpy white trunks. We took in the action of the frantic dancing from the deck above, and by 3am, with the party still raging, we turned in. Apparently, it was still going at 6am – not expecting too many to turn up for my lecture tomorrow.