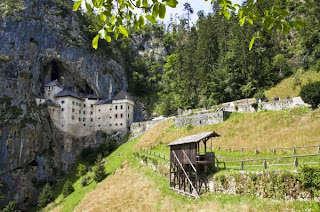 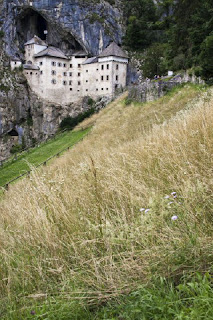 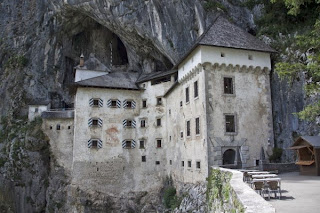 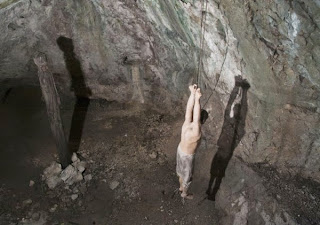 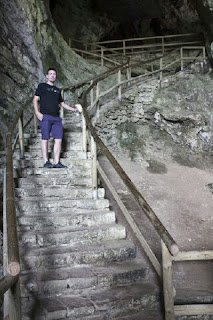 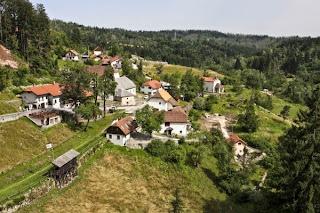 Central Slovenia doesn't have many campsites, so our plan today was to break up our westward journey towards the coast with a stop in Postojna, home to an enormous (and enormously popular) limestone cave system. Things didn't go quite to plan because, firstly, the campsite that was advertised as being 2.5kms from Postojna appeared to be much, much further away than that, in the middle of nowhere, and up a massively steep hill (so steep, that even our newly acquired cycling stamina would find it impossible). Secondly, on reflection, we decided that we weren't actually interested enough in caves to spend €44 Euros to join the hordes getting a train ride around a place that seemed to be advertised as a Disneyland for troglodytes.

So, satisfying ourselves that all we were missing out on was "just a big hole in the ground", we drove on to the impressively situated Predjama Castle, a medieval castle that was built into the rock face of another huge limestone cave. It was certainly one of the most distinctive castles that I've been to – half-cave, half-fortress – although it was probably more noteworthy for how it looked outside, than it looked inside, which was a bit bare and lacking in interesting features.

The most interesting thing about the castle's history was that it was once a refuge for an outlaw called Luegar, a kind of Slovenian Robin Hood, who was holed up here for months under siege from the Austrians. Luegar knew the secret passages through the massive cave system behind the castle, so would regularly taunt his attackers by lobbing fresh cherries at them (you can imagine him shouting Monty-Python insults at them about "your father smells of elderberries"). They got the last laugh though – a traitor told them when Leugar was sitting on the loo, and they fired a cannonball at the toilet and killed him while he was on the job. It wasn't just Elvis who died on the toilet.

Having filled up on fascinating stories like this, it was time to head down to the coast to the little Venetian town of Izola.