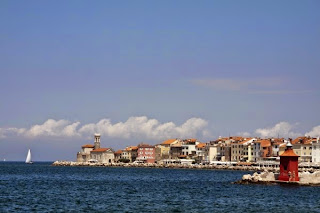 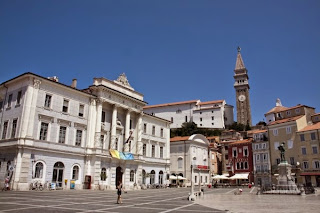 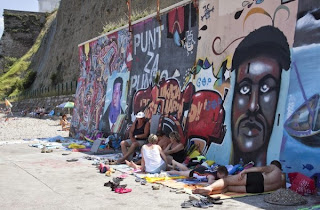 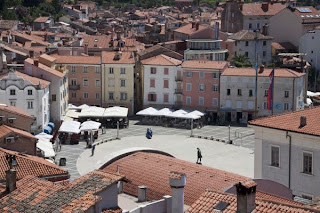 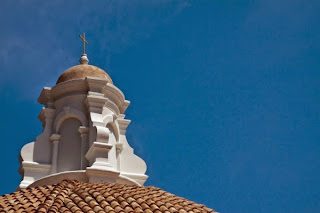 From Izola, there's a cycle route along the path of an old train line that takes you to Slovenia's more upmarket resorts of Piran and Portoroz. As neither the road nor this path follows the coast, we were wary that we'd have to cycle up some pretty steep hills to get there, although the woman in the tourist office told us that "it wasn't too steep". Either she's a top-class cyclist or she was having a laugh with us, because the first hill felt like it was nearly vertical, and it almost killed us off before we'd really got going.

Fortunately, we persisted and the journey proved to be quite beautiful, through rolling valleys of vines, up a few more hills and then down to the coast again to Portoroz. With its beach bars and packed beaches of imported sand, I guess that Portoroz fancies itself as the St Tropez of Slovenia, although to me it seems a bit more Blackpool than Riviera.

So, instead of lingering there amongst the bucket and spade brigade for too long, we headed to the more refined charms of Piran along the coast. This place really is like a mini-Venice, full of graceful Italianate palazzi and churches – it made me wonder what Italian tourists must feel like as they walk around these quintessentially Italian streets. Do they think that these towns should belong to Italy instead? After all, they're only a few miles from Trieste across the border. Having said that, you only have to go a few miles in the other direction to Croatia to find yet more Venetian towns without the Italian flag flying over them – modern borders and modern history can be a confusing thing.

Without doubt, Piran is the most beautiful town on the Slovenian coast, but, as I said, Izola's more prosaic charms made it feel a bit more of a "real" place to me. It's funny to think that in their time, these towns have been ruled from Venice, from Vienna, from Paris (under Napoleon), from Rome (under Mussolini), from Belgrade (as part of Yugoslavia), and now from Ljubljana. I don't think that it's hard to see why they've been so coveted – it's a beautiful part of the world.