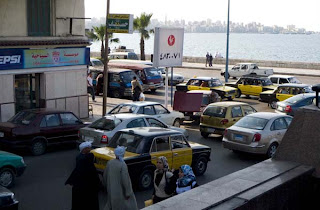 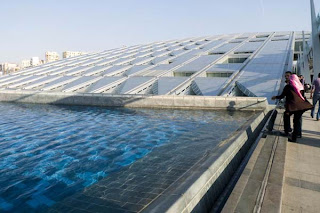 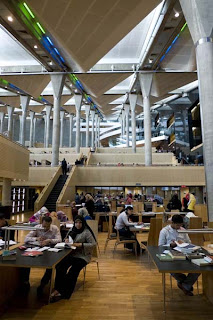 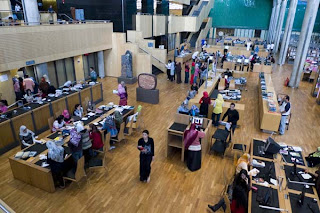 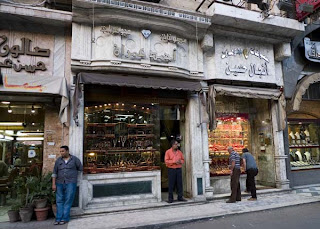 Another day in the chaotic urban jungle that is Alexandria, Egypt's second city. Today, we decided to walk the other way along the Cornice, to the Biblioteca Alexandrina. Alexandria isn't really a pedestrian friendly city – its pavements are extremely busy and uneven, full of rubbish, and very tall, while to cross the road is to take your life in your hands (there's no point waiting for a gap in the traffic, you just have to walk between the speeding cars and hope they swerve around you).

Coming out of the dock gates, you also have to run the gauntlet of the countless pushy taxi drivers, horse and buggy drivers, hawkers and beggars. The best tactic is to ignore them, while they follow you down the street with their constant offers of things you don't want. One little girl kept on tapping my arm asking for money, for about 60 seconds. When the usual ignoring tactic didn't work, I resorted to the only Arabic I know, "La shokran" (no thank you) – on hearing the words, she recoiled like a scalded cat and literally ran away with a shocked look on her face. Either my pronunciation was so bad that it sounded like something incredibly rude, or she must have been utterly shocked to hear a westerner using Arabic.

Having got beyond Alexandria's welcoming committee, you actually get very little hassle in the city at all, or even a second glance – everyone is so busy trying to get by on the teeming streets, that they don't have time for you.

We eventually made it to the Biblioteca – the best feature of a fairly run down city. This amazing piece of modern architecture was built in 2002, and is an attempt to recapture the glories of Greco-Roman Alexandria, when the city was a centre of culture and learning, to rival Rome. Alexandria's original ancient library (which was destroyed in an earthquake 2,000 years ago) was once the biggest library in the world, and the new one is pretty wonderful too. It's built in the shape of an ancient sundisk which filters in the light, and it has an enormous reading room which accommodates over 2,000 people. It was interesting to note that most of the people studying in there were girls rather than boys, while the most popular website of the students was youtube.

Actually getting in there wasn't that easy either – unlike most of the taxis, shops and restaurants in the city, they only take Egyptian pounds, and as we were only going to be in Egypt for one more day, we hadn't bothered to change any cash. So, to buy a ticket we had to trail around 5 different banks to find one who would change our dollars into pounds. The final one said they couldn't do it because it was after 3pm (what difference that makes was never explained), but after much begging, they finally relented. Considering that we only wanted to change $5, they probably wished they hadn't bothered.

So, we now have 1 Egyptian pound left (about 20 cents US) to get us by in Cairo tomorrow.