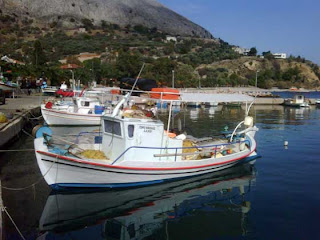 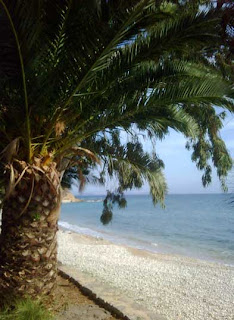 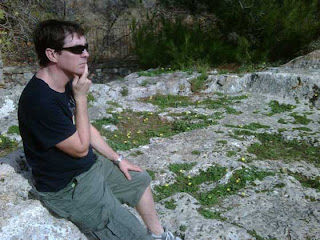 One of Chios's lesser-known claim to fames is that it is thought to be home to the Ancient Greek poet/author Homer. If you believe the tourist brochures, it's also meant to have been home to the ancient medicine man, Hippocrates, and the explorer Christopher Columbus – although there's not a lot of real evidence to back up any of these claims.

So, we decided to do a long hike from Chios Town, to the small fishing village of Daskolopetra, the home of Homer. We did another power walk along the coast, passing old windmills and fishing harbours, to Daskolopetra, and we followed the signs to "Homer's Chair". This is a scarcely marked piece of rock, which was carved into a semi-circle of seats, where Homer's pupils would listen to the master, while he sat in the middle on a rock. If Homer did sit here, it would have been an inspiring spot, with a backdrop of rugged mountains behind him, and the blue sea in front, with Turkey sitting in the haze just across the waters.

I sat on the rock, and hoped that some of its lyrical powers would be transferred to me through osmosis, so that my own travel tales might provide some inspiration to the audiences of my lectures.