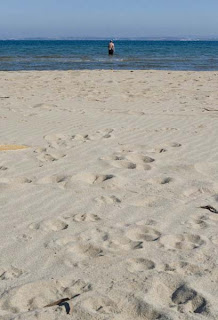 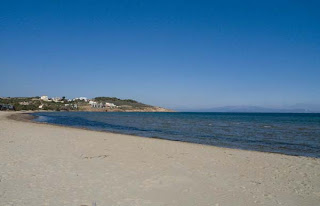 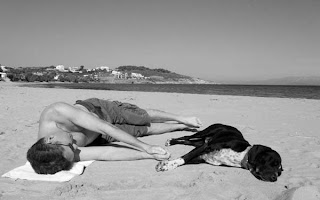 As this was another unusually warm day, we decided to walk along the coast to the nearest sandy beach, at Karfas, which is about 5 miles away. 5 miles is obviously longer than we expected, and in a state of near-exhaustion after almost 2 hours, we nearly gave up on our trek, when all we could see was the island's ugly power station smoking away ahead of us.

Just as we were about to turn around, we flagged down a car to ask where this beach was, and it turned out that Karfas was just over the hill, about another 10 minutes further. On turning the corner, we found a beautiful deserted beach (apart from two moth-eaten dogs who befriended us), fronted by a small resort which looked like it had packed up for the winter a long time ago. As we sat on the beach, it dawned on us that this could be the last time we might go for a swim in the sea for a while, so I decided to brave the inviting waters.

As hot as I felt after the long walk, I wasn't quite prepared for the shock of how chilly the water was, but having called Tracy a chicken for not going in, I had to carry on. So, I inched in, trying to stifle the high-pitched yelps that were issuing involuntarily and trying hard not to hyperventilate. Somehow I managed a few minutes of frantic swimming, trying to look like it was great fun rather than a near death experience, while I unsuccessfully tried to coax Tracy into the ice bath.

When I emerged, I was so cold, but was glad to be able to boast to people back on the ship that I'd had a swim. This exhilaration quickly wore off when I realised that we had to negotiate the long 2 hour walk back, although at least it gave me a chance to warm up.