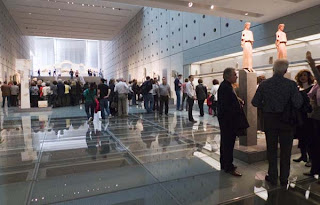 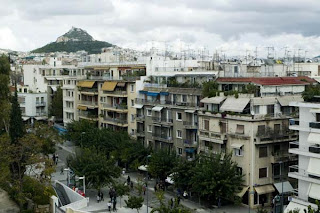 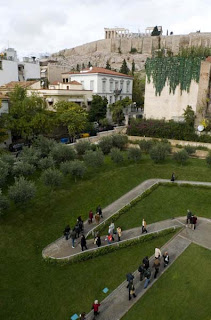 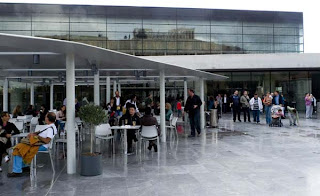 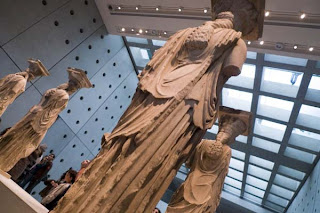 For the last few years of our visits to Athens, we've seen an enormous construction site at the foot of the Acropolis, slowly taking shape into the gleaming new Acropolis Museum – the new pride of Athens. The Museum was built to put further pressure on the British Museum to return the Elgin Marbles (or the Parthenon Marbles as the Greeks prefer to call them) The British Museum has always used the fact that the Greeks didn't have somewhere appropriate to put the marbles, as one of the arguments for keeping hold of them.

So, now the Museum has finally been completed, it was time to go to see it. It's definitely very well put together, and in addition to its displays on the Parthenon, it also has some excellent displays of statues and other finds from the Acropolis area. As a result, it's massively popular, and visiting it on a Sunday, when it seemed like the whole of Athens had decamped to the Museum to jostle us, meant that it wasn't the most conducive atmosphere to enjoy the exhibits.

The displays in the Museum are fairly one-sided in their account of what happened to the marbles – they accuse Lord Elgin of "taking advantage of the situation" and "stealing" the marbles. This is perhaps a little unfair, given that he did legally purchase the marbles from the Ottomans who were governing Greece at the time, and who didn't have any regard for Greece's ancient heritage. It's argued by the British Museum that by removing the marbles, they actually preserved them and prevented them from being further damaged by the Ottomans, or by the pollution that affects Athens.

It opens up all kinds of debates about whether museums should return their exhibits to their countries of origins – you can certainly see both sides of the arguments. The fact that so many of the displays at the Acropolis Museum, were just plaster casts of the originals held in the British Museum, is certainly putting a whole heap of pressure on the British.