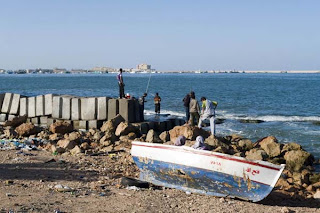 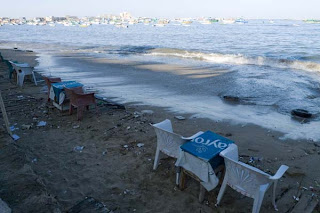 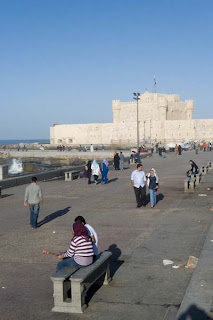 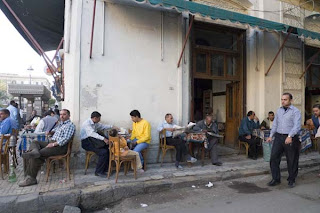 After our exertions in Israel, we took it easy for the next two days in Egypt – the thought of super-early starts and 3 hour coach rides each way to Cairo somehow didn't appeal.

We did venture into Alexandria again though, for a walk around the Cornice – the four mile long stretch of waterfront that lines the city's Eastern Harbour. As you walk, your nose is assaulted by all sorts of smells – the odd nice smell of food cooking, which is then overpowered by the odd foul stench blowing in from the sea, all against a background of exhaust fumes from the choking traffic.

If the Cornice were in the South of France, this would be one of the most expensive pieces of real estate in the world – it's a stunning sweep of coastline, lined with some beautiful stretches of white sandy beach, and framed by the deep blue of the Mediterranean. Unfortunately, many of the once-impressive colonial buildings are crumbling away, and the 40-plus sewage discharge pipes pumping out into the sea (some only as far out as 40 meters), mean that this place is a long way from reaching its potential.

We walked to the northern end of the Cornice, to see the site of the Ancient Pharos, a huge lighthouse built by the Ptolomies, 2,000 years ago – it was so huge and wonder-ful, that it was one of the 7 Ancient Wonders of the World. Nowadays, the chief wonder, is where did it go? The Pharos was destroyed by an earthquake in the 14th century, although its foundations and stones were used to build an Ottoman Fort, which still marks the spot.

Having seen this, our visit had to be truncated somewhat, because I had drunk so much water on the way there, and we didn't fancy risking food poisoning by stopping in any of Alexandria's unappealing array of restaurants or cafes to use their facilities. Spurred on by this necessity, the power walk back to the clean conveniences of the ship took half the time of the stroll out there.