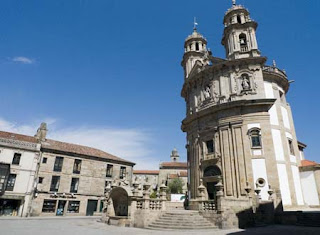 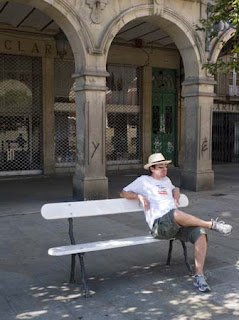 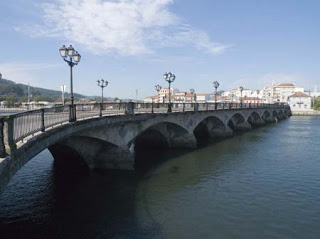 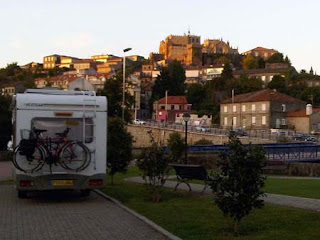 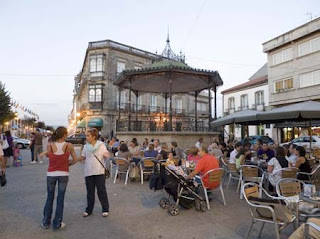 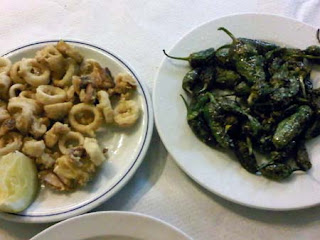 From Santiago, we headed South to the pretty town of Pontevedra, another stop on the pilgrim route. As we got there at lunch time, the whole town seemed pretty empty, but it had an attractive and historic centre, and every second building seemed to be a bar or restaurant which was a good sign. Unfortunately they don't have a campsite in Pontevedra, so we weren't able to sample the nightlife, and instead we headed further south, to the Spanish side of the Portuguese border, to the town of Tuy (pronounced "Twee").

Tuy doesn't have a campsite either, but it does have a parking spot just outside of town, set aside for campervans (although it was just us tonight). Tuy also seemed a pretty quiet place, the streets up to the historic centre were pretty deserted, the peace only being broken by a grungey bar blaring out rock music to no-one. We kept on going, and found the action – a lively street where the evening paseo was going on. We found a bar which was perfect for people watching, and reflected on how civilised Spanish society was – families and friends of all generations all mixing together on a Saturday night for a quiet drink.

After a nice meal, we retired to the van for a peaceful night's sleep – or so we thought…..

By now, the grungey bar had turned its sound system up to top volume, and seemed to be attracting the full cast from "From Dusk Till Dawn", who seemed to be passing our van all night long, shouting loudly. At 2am, we were woken with a fright by an idiot who thought it would be funny to bang the side of the van.

At this stage, Tracy was totally unable to sleep, and went down to the back of the van in readiness for our next attack; just as well…

At 4.00am, she heard someone fiddling round the bikes on the back of the van. She opened up the blind to be faced with another moron attempting to steal our bikes. The good thing was that in the darkness, her ghostly white face silently appearing at the window out of nowhere, literally scared the living daylights out of the moron, who was struck motionless for a second, before letting out a primeval scream and haring off into the night like he'd just seen a monster. This ungodly scream roused me from my semi-slumber, and prompted a foul mouthed tirade to see him on his way. Tracy and I now selected our weapons of choice in the event of further attacks – I was going to wield the awning turner like a double-ended light sabre, while she was going to use a plastic broom handle, to clean the scum off the streets of Tuy.

At this point, the realisation sunk in that we'd never get a good night's sleep here, so we packed up and hit the road at 4.30am, to find a motorway service station for a proper quiet night's sleep!