September 9th – Nailed it in Santiago 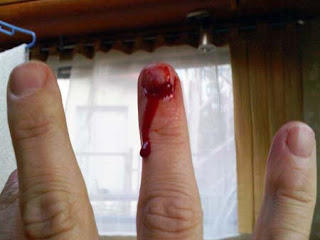 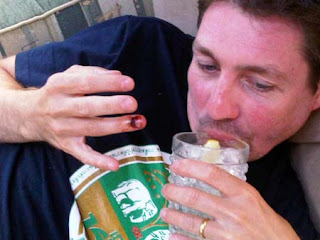 A late start meant we got to the campsite in Santiago slightly frantic with hunger – in my rush to get lunch started, I wasn't concentrating as I put the collapsible table up. Big Mistake.

Somehow, the collapsible table lived up to its name and promptly collapsed onto my finger, crushing it massively painfully and severing the nail just above the quick. Cue, a lot of pain, a lot of blood, a lot of swearing, a weakening of the knees, and a wasted day trying to stop the bleeding rather than going out sightseeing as intended.

Only the day before I had been boasting to Tracy that I have an incredibly high pain threshold, so I can only imagine that the pain that I was experiencing was something akin (or stronger) than childbirth – after all, when they torture someone, they know that the way to get them to confess is to pull out their finger nails, they don't make them give birth on the spot.

As ever, Tracy was a tower of strength and sympathy, administering that essential painkiller - a stiff gin and tonic – and wrapping it all up in blood soaked gauze. It finally stopped bleeding just before bedtime, and the good news is that I'm excused washing up duties for the time being.