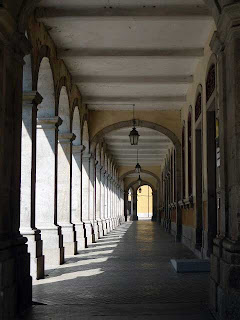 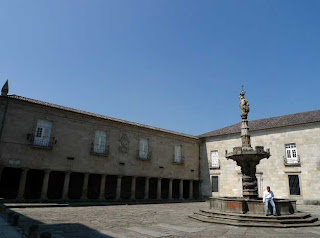 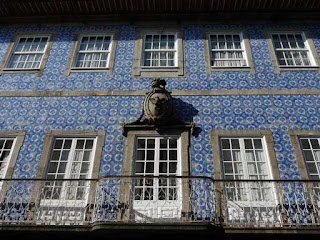 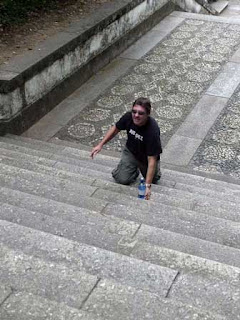 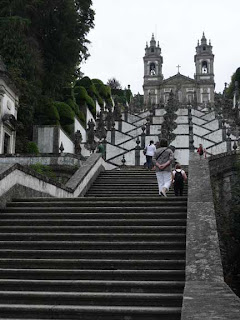 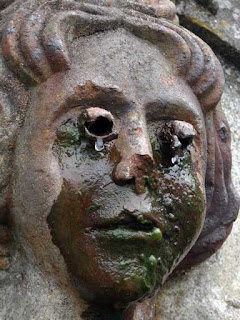 Braga has the distinction of having the cheapest campsite that we've ever stayed in - €10 per night, rather than prices around €30 per night we've been shelling out on in Spain. OK, the campsite was far from palatial (the toilets looked like they'd been built in the 1950s, and hadn't been cleaned since), it was on a noisy road where someone had worryingly graffitied in big letters "curva do morte", "the bend of death", but the big bonus was that it was next to the Municipal Stadium, which had free WiFi live and direct into the camper van – this ensured that we foolishly wasted whole evenings watching X Factor on YouTube.

It's strange not really having a clue about the local language here in Portugal – in Spain, we at least had some idea how to converse with people, but here we don't even know how to pronounce anything. I asked the lady at the campsite, how to get to the Church of Bom Jesus, and she looked at me like I was speaking Swahili. After a couple more attempts, she worked out what I was talking about, and she pronounced it something like Bom Shesooosh. Basically, if you want to speak Portuguese, you have to speak Spanish like Sean Connery putting on a bad Russian accent.

Anyway, Braga's a nice historic town – not too lively, but fairly gentile. During Portugal's golden age, Braga was the ecclesiastical capital of Portugal, which has left it with an enormous number of churches richly decorated with the wealth brought back from Portugal's growing overseas empire, so we enjoyed wandering around all the baroque, rococo and neo-classical architecture of the attractive city centre.

For lunch, we stumbled on a lovely vegetarian restaurant – this is the first time in all our years of travelling where a veggie restaurant has seemed the best dining option – Tracy has never been so happy, and I think that this is the first day I've not eaten a single morsel of meat in about 15 years (thank God the Francesinha I ate in Porto is taking so long to break down in my steadily growing stomach).

On our final day, we went to the famous Church of Bom Shesooosh – one of Portugal's top pilgrimage sites, at the top of a very steep hill. Pilgrims who want to cheat, take the funicular, but we were made of sterner stuff, and climbed something in the region of 540 steps up a lovely but exhausting baroque staircase all the way to the top. If you're really pious, apparently you climb the steps on your knees, but struggling along on our self-sacrificing vegetarian diet, we restricted ourselves to foot power alone.