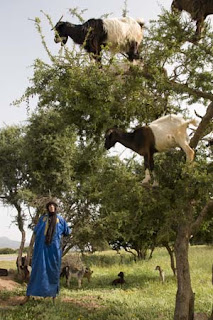 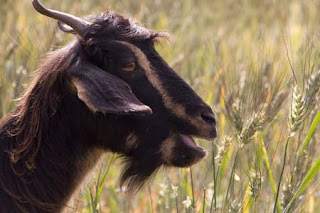 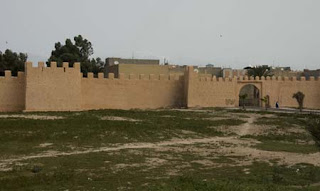 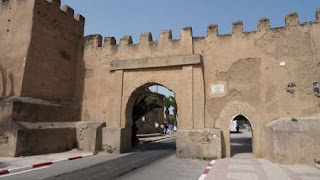 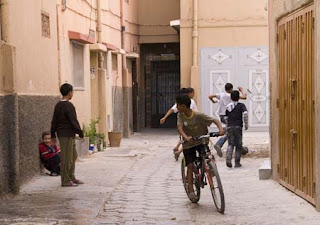 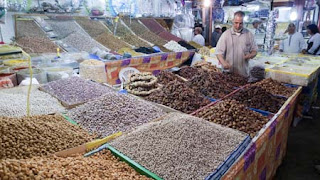 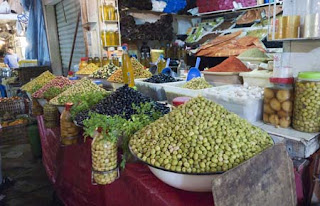 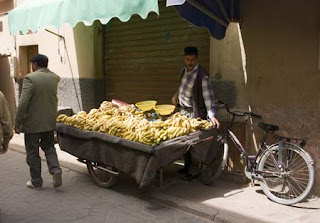 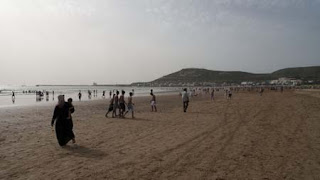 So, from the ordered First World environment of the Canaries, it was just a short trip over to the chaos of Morocco. Actually, Agadir isn't that chaotic – it's a fairly cosmopolitan and modern beach resort that has a generally relaxed holiday atmosphere. The reason that the city has such a modern appearance is that it was almost totally destroyed in a terrible earthquake in 1960 which left 18,000 dead; and so the city has had to be totally re-built, with an accent on functionality rather than beauty, so it's not the most beautiful of urban environments.

We decided to leave this fairly "un-Moroccan" environment behind, and take the one-hour trip to the medieval town of Taroundannt across the fertile Souss Valley. We passed through some more untypically Moroccan countryside – totally
green and full of wild flowers because of the spring rains – stopping briefly to photograph some carefully staged goats perching recariously at the top of some argan trees.

Once we arrived at Taroudannt, it was easy to see why the city has been dubbed the "Mini Marrakesh" – it's totally surrounded by imposing city walls and it retains its unspoilt medieval atmosphere. We explored the warren of busy streets on foot, and immediately came in touch with the reality of streetlife in Morocco. Various "guides" attached themselves to our group, in spite of the fact that we had a proper tour guide leading the party and a local escort – as they
ushered us officiously through the souk, it was difficult to know what their game was, but it soon became apparent that once they'd got a dialogue of any sort going, they were going to try to direct us to a particular shop or stall.

Once we were given free time, I tried to explain to my new personal entourage that there was absolutely nothing that I wanted to buy; but this was just taken as a bargaining position, so I continued to be followed around by my new-found friends. When they finally realised that I really wasn't in the market for a jelibayah, some Moroccan slippers, a Manchester United shirt or an Aladdin's lamp, this was treated as the ultimate insult. "Why not?", they implored as if
I'd refused pull them out of a burning fire. "Because I don't want to buy anything". "Why not?", was the constant reply – it just didn't compute that I really wasn't on a shopping mission here for their Moroccan tat.

Anyway, this is all a part of the tourist experience in Morocco, so we had a nice time soaking up the atmosphere and avoiding the gaze of anyone selling anything  – and half a day was just about enough time to see everything without getting fed up of it.

After lunch back on the ship, we caught the Shuttle Bus into Agadir, and did a walk along its busy beachfront promenade. It's certainly a beautiful beach, five miles of golden sands; and on a Saturday afternoon, it's packed with locals and holidaymakers. As you watch all the people sunbathing, playing football, or jumping in the waves, you could easily take it for the Costa del Sol or Algarve – although when you looked closer, you could see that virtually all the locals on the beach were male, and the few girls out there were very covered up (apart from the female tourists, who stood out a little in their skimpy bikinis, which certainly guaranteed them their fair share of stares from the local boys).