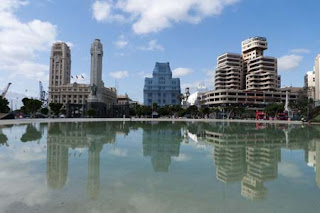 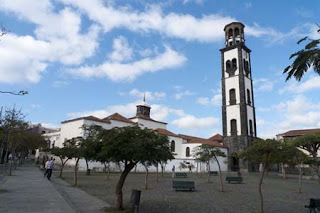 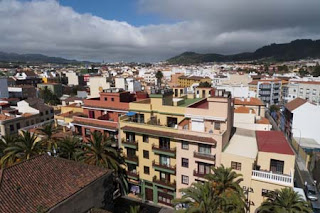 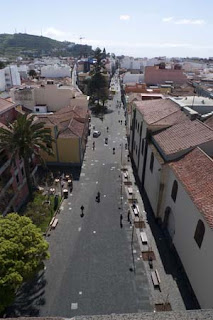 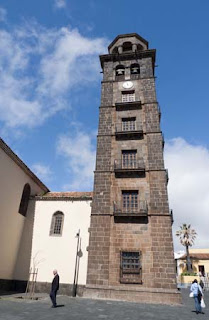 2 days after Tracy's birthday, we were finally on dry land to celebrate her big day. So, we decided to do a bit sightseeing first, and we caught Santa Cruz's new tram up to the old colonial capital, La Laguna. This new system is super-efficient and pretty cheap too - €2.45 for the 45 minute journey up the steep hills behind Santa Cruz.

The tram deposits you in a world away from the cosmopolitan shopping streets of Santa Cruz, and from the tourist resorts of the South of the island. La Laguna was the island's first capital, founded in the 15th century, so its quiet streets are lined with historic churches and old stone houses fronted by their traditional Canarian wooden balconies. The town feels like it's been locked in something a time warp, and has an almost South American feel – not surprising, since La Laguna's layout was used as a template for many of the new cities founded by the Spanish in the Americas.

Somehow we ended up in one of the old convents, where the attendant told us that they have the body of a saintly nun whose body was dug up and found to be miraculously preserved – as we expressed feint interest, before we knew it, we were being whisked into a little museum about her life. It turns out that she lived a life of total self-denial and self-punishment – they showed us the brick that she used as a pillow, the planks of nails that she used for a bed, the chains that she used to whip herself to purge her body of its sins, and the blood-stained rough shirts she wore. Apparently they think that this odd behaviour qualifies her for sainthood, and she's one miracle short of being beatified.

Anyway, having seen all this self-denial, we were in need of some self-indulgence and feeling hungry. Unfortunately, our quest for the perfect restaurant for the perfect belated birthday lunch wasn't particularly successful, so we just had a snack and will do the celebratory lunch another day.

So, we got the tram back into the busy shopping streets of Santa Cruz, for Tracy to select her birthday presents from her mile-long list of things she absolutely needs. It turns out that today was merely a "scouting mission" in preparation for an all-out assault when we come back in two days time. I wait with baited breath…..