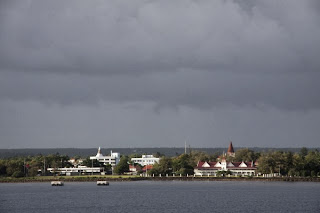 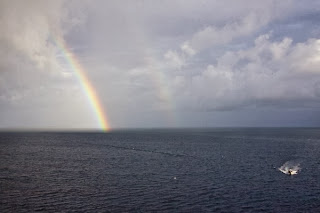 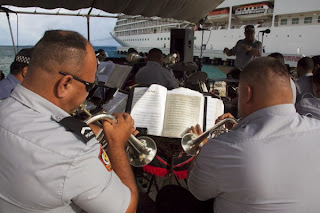 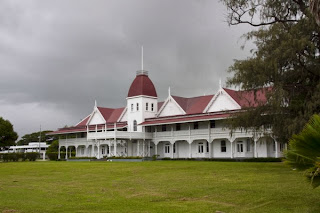 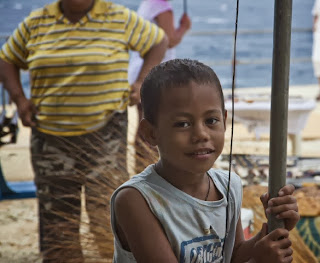 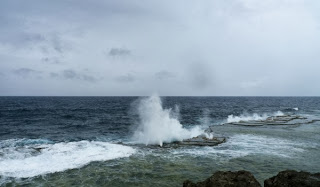 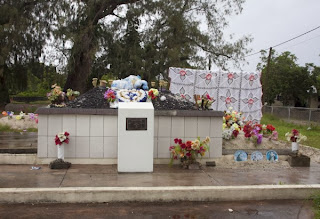 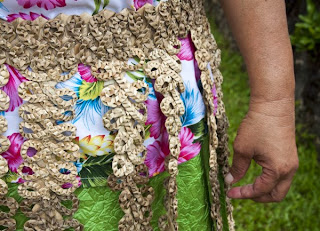 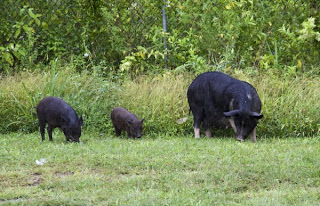 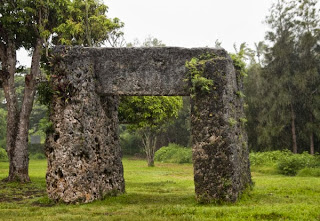 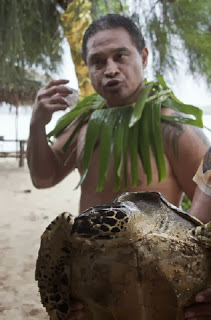 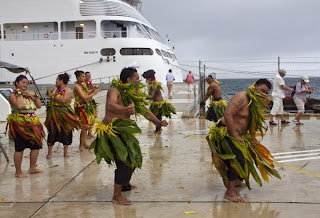 After missing out on a day of our lives yesterday as we crossed the International Date Line and the calendar jumped from January 22nd to the 24th, we arrived at the island Kingdom of Tonga. With black clouds hanging menacingly overhead, this flat island didn't provide as spectacular approach as American Samoa; however, one of the brightest rainbows I've ever seen out to sea, gave us a warm welcome.

However, the rainbow was a sign of rain coming in from the sea, and boy, was it A LOT of rain. Almost as soon as we stepped ashore, the rain came thumping down in huge drops, with the strong winds mostly driving it sideways at us. This didn't exactly make it great sightseeing or picture-taking weather, but we saw enough of the island to give us a good feel for Tonga and its people.

At each stop, we'd dive out of the bus and try to take our pictures as quickly as possible before we got totally drenched – we weren't always very successful at this. Our first stop was at the impressive Royal Palace guarded by a barbed-wire fence – the monarchy has only given up its absolute powers in the last few years and allowed Tonga to evolve into a democracy, so the fact that the Palace was fenced off and closed from its public, was perhaps symbolic of the distance between the King and his subjects.

As we drove around this drenched island, the main things that struck you were how fertile it was – flat fields of crops and livestock making a strong contrast to the jagged peaks of American Samoa, while the waves and smiles we got from the soaked locals meant that the welcome was every bit as warm as Pago Pago's. We arrived at the south of the island and the rain relented briefly to allow us to see the famous blowholes at Houma – as if we needed to get any wetter, the thrashing of the sea swept the waves into holes in the limestone rock, that would then spurt into the air like a geyser, and cover us in fine spray.

We then visited a couple of ancient sites that were a legacy of the early Tongan kings – a stone archway from 1200AD that was Tonga's version of Stonehenge, and some stone platform tombs of a similar vintage. Of course, things changed for Tonga's Kings with the arrival of the first Westerners, so we travelled over to the site of Captain Cook's first landing on the island. Cook thought he was getting on well with the King, and called the Tongans "The Friendly Islanders" (in spite of the fact that they were planning to kill him just before he sailed off).

Over the next century, the rest of the Pacific islands were being carved up by the Western powers, but somehow Tonga retained its independence, and its monarchy is the last Kingdom left in the Pacific. However, as we saw when we got back to the capital, Nuku'alofa, Tonga hasn't had an easy transition from being an absolute monarchy to now being a young democracy. The gaps in the buildings on the main street, and the newly re-built buildings were all a reminder of the terrible riots that struck the capital in 2006, when a pro-democracy demonstration turned nasty as 80% of the downtown area was burned down and 8 people were killed. That much of the re-building has been financed by loans from China, rather than the former main regional powers of Australia or the US, is an indication of how the balance of world power has shifted in the last decade.

At the port, we were treated to a dance show by a local troupe, although it was sadly cut short when the nasty weather turned particularly vicious – the tent they were in nearly took off in the 50mph gales, and everyone was forced to run for cover like drowned rats. A dramatic end to a turbulent day.

Next time we come back to Tonga, it had better be sunny!