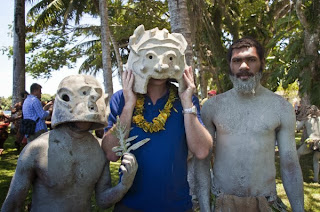 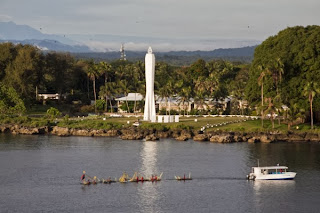 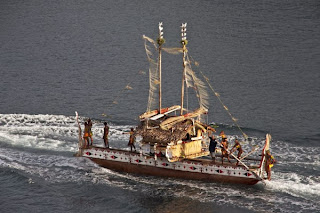 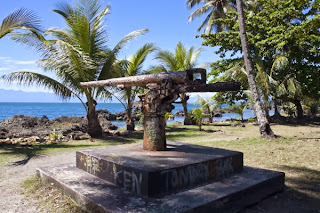 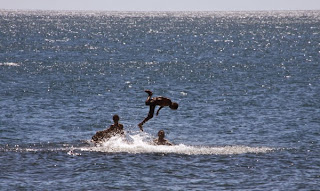 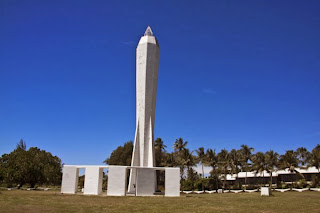 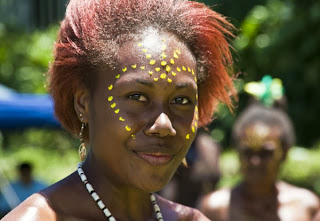 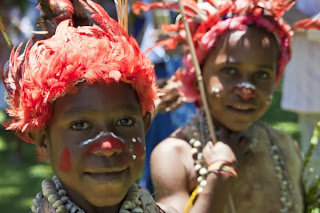 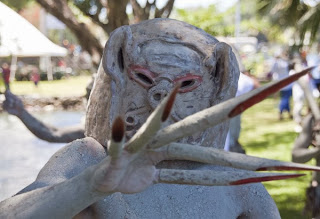 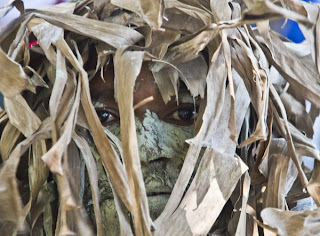 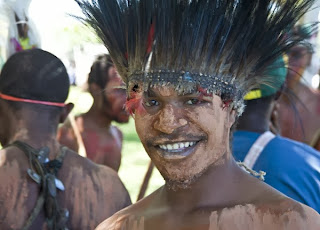 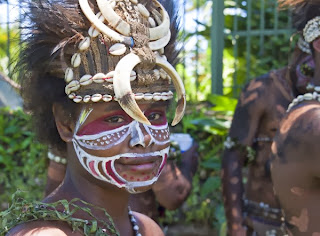 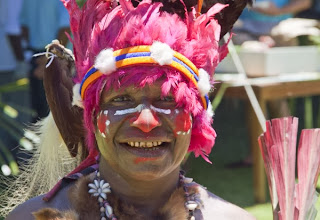 For our second stop in Papua New Guinea, we travelled up the east coast of the country to the town of Madang. The town used to be known as "The Prettiest Town in the Pacific", but heavy fighting in World War Two destroyed it, and then PNG's current economic plight has left it with a fairly unprepossessing town centre, which was pretty much deserted on a quiet Sunday morning.

However, the town's setting is still undeniably pretty - as we sailed into the attractive inner harbour from the sparkling Astrolabe Bay, we were greeted by plenty of people in canoes, and by loads of kids shouting enthusiastic hello sto us from the water's edge. What made our arrival even better for me, was that we were being met by my Uncle and his wife, who'd flown up to see us from PNG's chaotic capital Port Moresby.

After showing them round our floating palace, they drove us around Madang's "sights" such as they were. We drove round the surprisingly attractive golf course, stopped off at the striking Coastwatchers Memorial (a memorial to the Australian servicemen who bravely stayed behind the lines to report on shipping movements, after the Japanese invasion in World War Two), and popped into the Madang Club for a drink. The general atmosphere seemed wealthier and more developed than Alotau (everyone was at least wearing shoes), but the fact that many of the houses were surrounded by barbed wire (unlike Alotau) showed that at least some of PNG's crime epidemic had spread to the smaller cities like Madang.

But, the main event was a "Silversea Experience" put on for us at the Madang Resort (one of the best hotels in the country) – a traditional "Sing Sing" of different performing groups. As we got close, we could see crowds of locals peering through the fence, and hear drums and music in the distance. But, it couldn't prepare us for the visual feast that was to greet us. On the lawns of the resort were about 15 different dance groups from the different parts of the country, all performing lustily in different sections – there was so much going on that you didn't know where to look. It was sensory overload.

We went from group to group admiring their exotic costumes, head dresses, and body paintings, watching the many different styles of dances – the aggressive moves of the fierce highlanders contrasting with the gentle swaying of the Micronesian islanders. Favourites included the slow movements of the bizarre-looking mudmen from the Highlands – their bodies covered in grey mud and wearing heavy clay helmets; and, the tuneful rhythms and graceful dancing of the group from Bougainville, played out on instruments made from plastic piping struck with a flip-flop (it might not sound promising, but it was lovely music!).

Often at these sort of folkloric shows, the performances can be a bit shambolic or lacklustre, but here, each one of the groups danced away expertly and enthusiastically in spite of the hot sun. It was almost like a dance-off between the groups, with the winners in terms of longevity being the group from Madang and the group from Bougainville – neither would give up all afternoon.

Silversea had organised the event beautifully, with lots to eat and drink, and most people I spoke to thought it was the best Silversea Experience they'd ever been to. Even my Uncle, who's been living in PNG for about 40 years, thought that it was the best Sing-Sing he'd been to.

It was the perfect background to a lot of catching up with my family – a really joyous occasion that left everyone with enormous smiles on their faces. An absolutely stunning day!