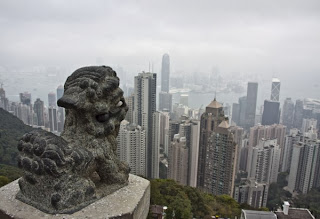 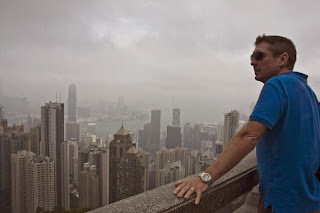 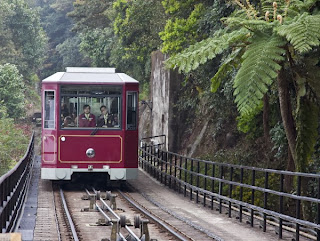 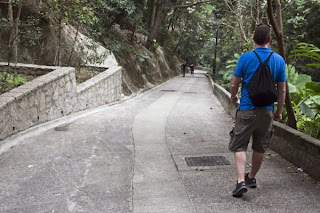 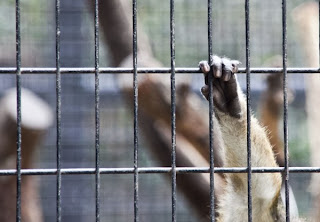 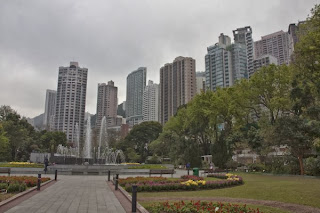 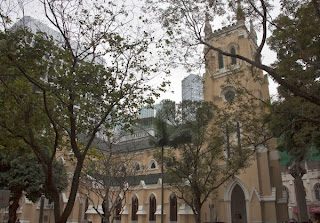 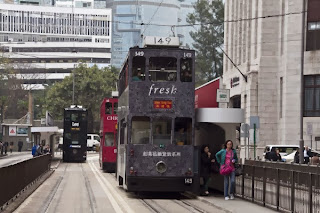 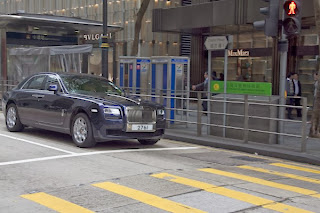 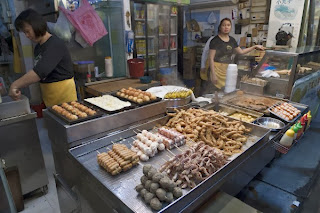 The last time we'd tried to walk up the Peak on Hong Kong Island was 15 years ago – my overwhelming memory of the attempt was being absolutely exhausted, so today was an attempt to see how far our bodies have deteriorated in the intervening years.

Last time, we'd caught the mid-levels escalators (incidentally, the world's longest escalator system) up some of the way to give us a bit of a head start; but this time we'd left too early for them to be running in the right direction (they ferry commuters down to Central until 10am, and only after that do they run uphill). So, we were already at a disadvantage as we trudged from sea level up the steep streets to the top of Mid-Levels. This is where it got difficult, but the views steadily more impressive.

The steepness of the path up was incredible, and I was soon reduced to a panting, sweaty mess, while Tracy stormed her way up like it was a walk in the park. Every now and then we'd get a glimpse of Hong Kong's unbelievable skyline through the trees to give us a bit of a boost; and finally we made it up to the 450 metre top.

By this stage, my shirt was soaked through, so it was actually a little cold in the air-conditioned coffee shop that we took refuge in to re-gain our breath. Sadly, it was a bit misty outside (pollution blowing down from China is becoming an increasing problem here), so we couldn't see the skyline in its full glory, but the views were still fairly invigorating.

After about an hour, the lactic acid in our thigh muscles had finally dispersed, so it was time to get our systems pumping again by trekking back down– we were too tired to do this downhill trek 15 years ago, so maybe we haven't deteriorated that much. It was certainly quicker coming down, but the jarring on our old joints as we stomped down was pretty tough. Thankfully, we broke up our descent by popping into the Zoological Gardens to have a look at the sleepy lemurs and the whooping gibbons who were leaping around manically; before exploring some of the few remaining old colonial relics in Central.

I suppose that doing one of the toughest treks in Hong Kong, is hardly great preparation for an afternoon of retail therapy, but we decided to ignore the pain and explore Kowloon's enormous Ocean Terminal Shopping Mall, to confirm that Hong Kong is no longer a place for clothing bargains any more. If you want to browse all the luxury western brands, then this is the place to come – an unbelievable amount of money must be spent here every day of life.

We thought that maybe Hong Kong's famous Night Markets would be more fertile territory for bargains, and so, after dinner, we headed up to the packed streets of the Ladies Market, where copies of all the expensive luxury goods were on sale at knock-down prices. To be honest, most of them were fairly low-quality copies, but it was fun to soak up the vibrant atmosphere and haggle with the vendors.

With its jostling crowds, flashing neon signs, tinny music being played from every stall, and various food stalls pumping out all kinds of aromas (good and bad), the market provided the typical Hong Kong sensory overload. With our tired legs getting increasingly heavy, finally we could haggle no more, and headed back to the ship to recover.