On the face of it, Darwin shouldn't really work as a city. It may be the capital of the huge Northern Territory, but only 220,000 people live in the entire territory. The unrelenting heat and humidity are almost unbearable (especially coming in the wet season as we were); the soil is too thin for much in the way of agriculture; it's been destroyed by three successive cyclones in its short life (most recently in 1974 by Cyclone Tracy, which blew in with winds in excess of 175 mph); and it was virtually wiped off the map by Japanese bombs in the Second World War. The fact that the charming headline in the local newspaper was, "Local Has World's Loudest Burp", is perhaps an indication that not much happens here!

Yet, somehow Darwin just goes from strength to strength. Everywhere you look, new developments and tower blocks are being built – it's a prosperous, well-run and expanding city. Residents I've spoken to, say that you either love Darwin or hate it – if you give it a chance, it gets under your skin, and before you know it, you've put down roots here.

It's not a climate to do too much on foot, but we spent our morning trying to dig out the city's few remaining historic sites – those that haven't been devoured by ants, blown up by Japanese bombs, or blown away by cyclones. Perhaps most interesting were the many memorials from the Second World War, commemorating those hundreds who died when a totally unprepared Darwin became Australia's only city to be bombed. To avoid spreading hysteria amongst the sheltered Australian public, the government kept most of the details of the bombing secret – which means that Darwinites are incredibly keen to get the story out there as much as possible.

Having totally over-heated, we came back to the ship to cool down, before joining a tour to see the amazing Jumping Crocodiles of the Adelaide River. It was an awesome sight to be on the boat, and see these menacing monsters suddenly come up to the surface stealthily next to us, and stare directly into their beady eys – it was their size that took you aback, most of them being over 5 metres long.

The boat driver reckoned he knew them all by name (most of them were named after their various wounds or missing limbs, that confirmed that the life of a crocodile must be a pretty tough one), and he knew just where to go to persuade them out of the water with a juicy lump of pork chop. As he dangled the meat, the croc would grumpily thrash about and snap his jaws to get his snack, before being coaxed to jump violently in the air, up to 6 feet high. As he wiggled like a hula dancer to get ever higher just a feet away from us, then you got to appreciate just how big and powerful he was.

The guide was keen to impress on us that we should never lean out of the boat to take our photos – one of the other crocs might come for us – and the sense of violence, danger and menace created by these prehistoric beasts made for a totally  unforgettable experience.

Crocodile Dundee may be the Northern Territory's most famous resident, but it was those awesome crocs that were the star of Darwin's show. 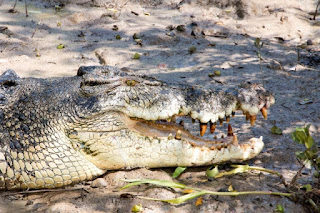 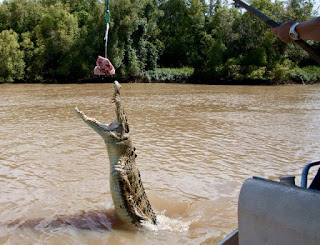 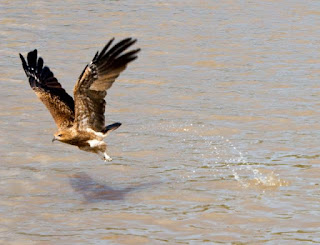 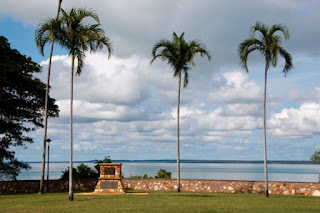 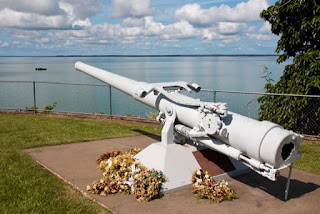