February 8th – A Bridge Too Far in Auckland

At the end of this part of the cruise, we finish up in Sydney, where some people will take that Sydney rite of passage of doing a hair-raising climb over the Sydney Harbour Bridge. However, what most people don't realise is that here in New Zealand's largest city, you can also do a very similar climb over the Auckland Harbour Bridge.

Granted, Auckland's Bridge isn't as iconic or as tall (this one is 64 metres tall, as opposed to Sydney's which is 134 metres high), but as you're looking at it from the shoreline, it still seems a daunting prospect. So, with trepidation rising, we climbed into our fetching grey jumpsuits, strapped on our helmets and walked over to the start of our ascent.

Like in Sydney, you're bolted onto a guide line at all times, so there's no chance of you falling (or jumping!) off, but as you look through the grilled walkway and see the waters lapping below you, there is a small sense of fear. Actually, being on that enclosed walkway is probably the most nerve-wracking part of it, as a sense of claustrophobia combines with the sense of vertigo, with the wind blowing at you and your safety harness clanking along noisily.

Once we reached the arch and climbed onto the open area, then the enjoyment started. With Auckland's stunning skyline as a backdrop, it was a surreal feeling to be walking over the top of all the traffic thundering along below us, and we got a unique perspective on the city's superb location on that wide, sparkling harbour. Sadly, when it came to having my picture taken, no-one told me that my helmet was on wonky, so I do look a bit like a cross between a special-needs miner and Hannibal Lector.

I wasn't sure what to expect from the bridge climb, but it was less scary and much more enjoyable than I had anticipated – a great experience.

So, on coming down from that (quite literal) high, I met up with Tracy and took the ferry across the harbour over to Devonport – an attractive Victorian suburb which has the atmosphere of a pleasant seaside resort. After a walk up one of Auckland's many extinct volcanic cones, we had lunch and soaked up the relaxed atmosphere - it was strange to think that we were just a 15-minute ferry ride from a big metropolis of over 1 million people.

As ever in New Zealand, Auckland seems to be a place where the accent is firmly on quality of life. 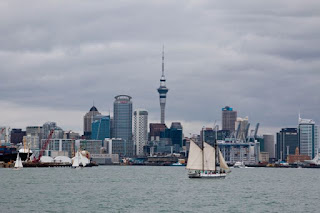 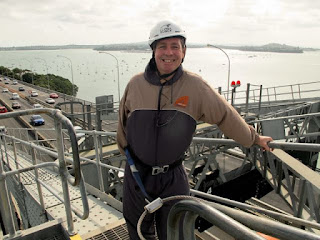 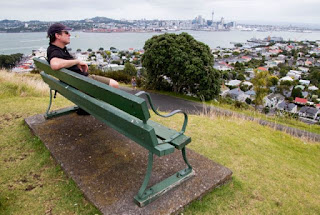 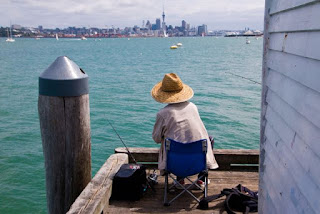