Coming to Bangkok over the weekend has a number of advantages:

1.The usually choked up traffic that can turn getting around here into a bit of a chore is much lighter (at least in the morning).

2. You get a chance to explore the city's famous weekend market.

3. The city's vibrant nightlife gets just a little bit wilder.

This weekend, we took full advantage of 1 and 2, although we're a bit too boring these days to enjoy 3 to the max.

So, on our first morning we caught the efficient Skytrain over to the famous Chatuchak Market – an enormous market where you can pretty much buy anything known to man. Just standing at the Siam Skytrain Station told us quite a lot about where Thai society was heading. From one spot, I could see 6 different sets of advertising screens, running videos for all sorts of consumer goods. The conflicting messages coming at all angles for me to spend money on various technologies and luxury items I didn't want or need was almost overwhelming.

Then, at the market, it was a similarly overwhelming constant bombardment of shopping opportunities, although in a much more low-tech way. Here, we worked our way through a confusing labyrinth of little stalls (there's over 8,000 of them in there!), many of them selling fairly similar offerings of knock off bags and clothes, but enough of them offering original or exotic items to keep it interesting.

It was incredibly hot and sweaty at the market, so after enduring as much as we could take, we headed back to the huge shopping mall where the Shuttle Bus drops you off at. To be honest, it's the air-conditioning that's the main attraction here – prices at the familiar western stores aren't any cheaper than at home (especially with the post-Brexit plummeting of the pound), and there's little on offer to make you realise that you're in exotic Thailand.

Our evening gave us a much more authentic Thai experience, as we headed to our new favourite Bangkok restaurant – Supanniga – where we had a truly excellent meal, that had all the best Thai flavours and spices, but in an unfamiliar array of dishes. Superb.

The next morning, we headed to one of the few (or at least it feels that way) temples that we hadn't visited before – the Golden Mount. This temple was once the highest spot in Bangkok, right up until the 1960s, but from its summit, you can see the row upon row of muscular skyscrapers that now dominate this once low-rise city. The Temple itself was a good one – you felt virtuous for doing the climb up there, as you sweat out the beer and spices from the night before; the views from the top are great; and the gleaming golden stupa against the retina-burning white paintwork of the floor was dazzling – all to the background tune of hundreds of wind chimes playing atmospherically on the warm wind that blew through.

Not wanting to risk getting stuck in the Bangkok traffic, we caught a river bus back to the Downtown area along one of the canals that ring the old town. Not only was it incredibly cheap (11 baht one-way), but it was much quicker than sitting in the crawling traffic waiting minutes for the traffic lights to eventually change. 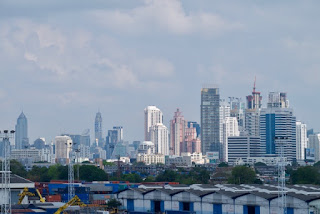 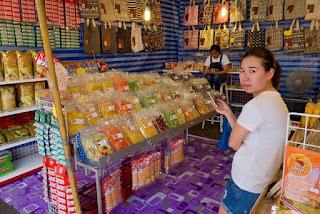 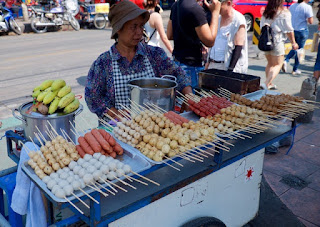 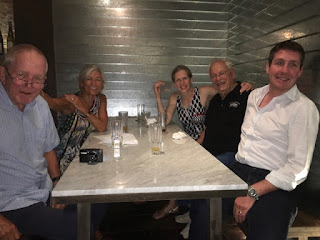 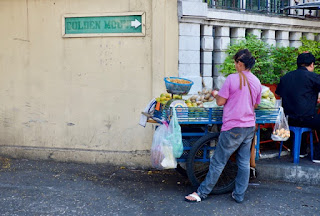 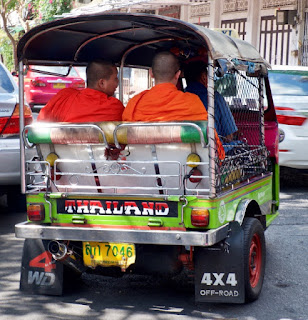 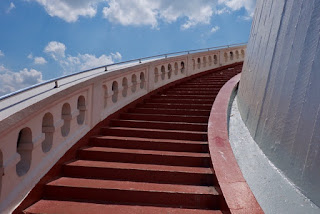 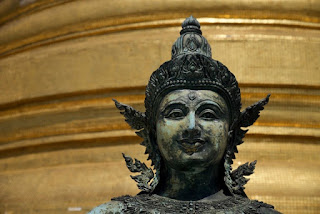 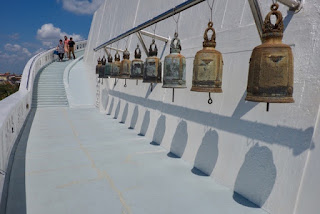 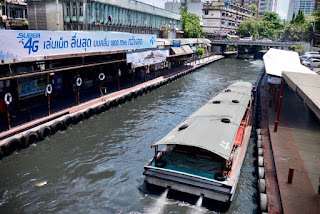