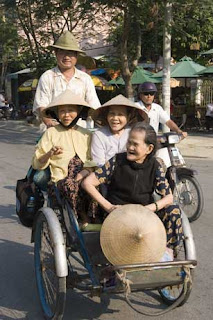 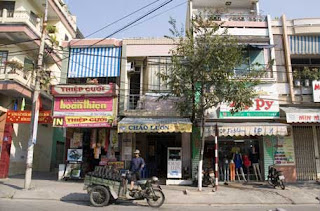 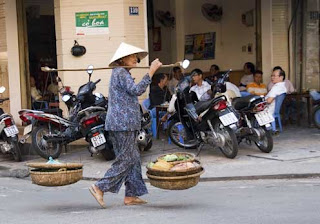 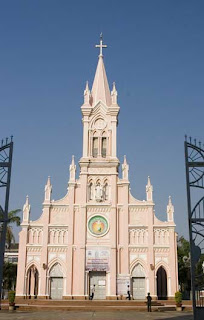 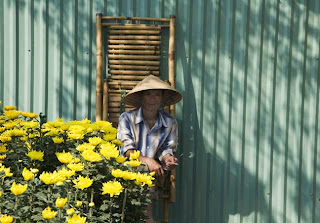 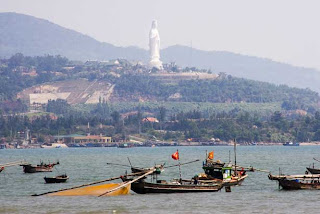 Yet another night of very little sleep (a whole 2 hours), made us unprepared for our day in Da Nang, Vietnam's fourth largest city. There's not much history to discover in Da Nang, because the town was only a small one until the Vietnam War, when the Americans turned it into a huge military base – in the 1960s, Da Nang's population rocketed from 50,000 to 1 million.

We went on a cyclo ride (a bicycle rickshaw) through the busy streets of Da Nang, as our ancient drivers struggled to move our over-size western carcasses around. Even though Da Nang isn't anywhere near as busy as Ho Chi Minh City, negotiating our way through the chaotic traffic bordered on the alarming.

We next went to the Cham Museum, which had a small, but interesting, collection of sculpture from the 1st to the 14th centuries – a time when Vietnam looked to India for its cultural base, rather than China, which has been the dominant influence ever since.

We ended our tour with a visit to China Beach – the beautiful white sandy beach where the American GIs did their R&R during the war. These days, there's line after line of huge hotels and super-casinos being built, that scar a once-beautiful piece of coastline. The pace of development on the beach is frantic – whole complexes have sprung up since we were here last year. It leaves you torn between bemoaning the influence of big business on an unspoilt environment, and justifying the developments if it creates a sustainable tourist industry. The fact that most of the hotels are foreign-owned makes you wonder how much wealth will trickle down to the local economy.