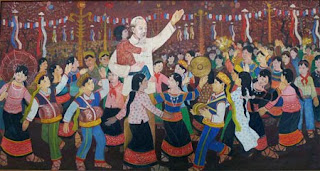 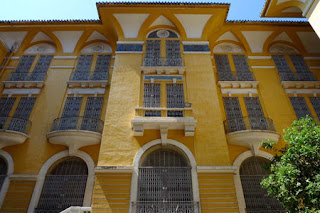 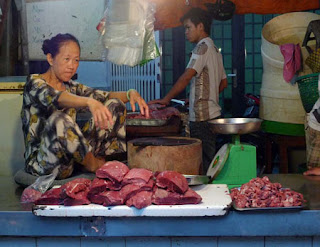 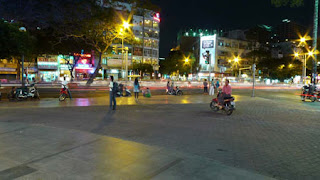 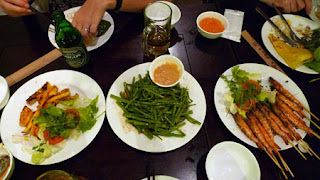 For the first time ever, we managed to get a taxi from the port to put the journey on his meter – this reduced the price by about 50% (in spite of him trying to go the long way – we stopped him pretty quickly).

We got him to take us to the city's Fine Arts Museum. The Museum had been built by the French in art nouveau style, as an attempt to impose the "civilising" ways and culture of the west on the locals. The beautiful museum is now decaying away gracefully, and all the art from colonial times has gone, so it's now filled with art from after the end of the war and reunification in 1975. It's amazing, but probably not surprising, how much of the art features men and women in uniform holding guns – even in restful rural scenes, you can make out people with guns in the distance. Considering that this country had pretty much been at war from before the Second World War to the 1980s, then it's not surprising that guns and war have embedded themselves in the national psyche.

Not that you'd have guessed that from the tumultuous action on the seething streets, which carries on at 100 mph, without a hint of what the country's gone through. The constant traffic of the city's 5 million motorbikes, and the 95F degree heat (35C), meant that we had to keep finding air conditioned cafes or shops to rest in, and bring our core temperatures down below boiling point. We found shelter in a big mall which was stuffed full of fake clothing – higher quality than the market, where I bought my high quality Rolex last week (it loses about 5 minutes every day), and then we found a nice bar overlooking the street, to watch the rush hour action. Every hour seems to be rush hour, but at about 6pm, the streets totally fill up with traffic.

For our evening meal, we found a fabulous restaurant, in an old Colonial building, that served delicious street food, in a safe and clean environment. Apparently the owner went round the city to find all the best street food practioners, and invited them to work in his restaurant. The place was absolutely packed with locals, which was a good sign, and we sat with a nice Australian couple who were doing a two week tour of Vietnam. Seeing as we were all pretty clueless when it came to ordering, the waitress took us around each of the stalls and showed us what their specialities were. Even so, ordering was complete guesswork, but what came out was fantastic – we had lots of beers and loads of food, and it came out at £5 a head. A great find!