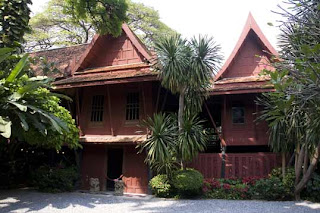 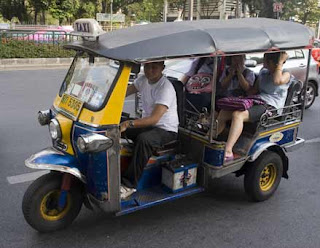 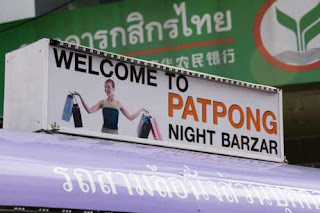 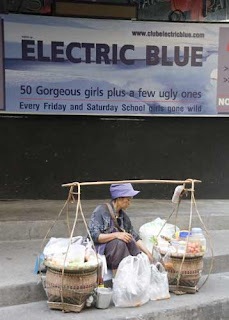 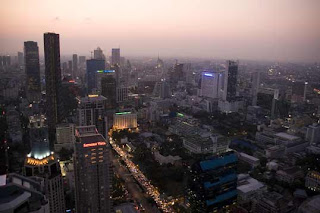 Today we ventured into Bangkok on our own. From the pier, you can either get a fixed price cab for a well over-the-top $20 to central Bangkok, or get to the gate and get a local cab who'll charge you on the meter – a much more reasonable 100 Baht ($3).

We went to Siam Square to walk around the enormous air-conditioned shopping malls. As you walk around these ultra modern complexes filled with wealthy Thais spending their baht with abandon, it's easy to forget that the taxi ride here, took us past overcrowded and scruffy shanty towns, just minutes away.

From here, we walked to visit Jim Thompson's House – a museum of folk and traditional arts and crafts, that's been made out of the American adventurer's former home. Thompson, who disappeared in the Malaysian jungle in 1967, reconstructed 6 historic wooden houses here after the war, and they're now a haven of calm in the chaos of the modern city surrounding them.

Having crept barefoot along the creaking teak floorboards, and explored the collection of traditional furniture, we braced ourselves for another onslaught on the mean streets of Bangkok.

Bangkok isn't really a pedestrian friendly place – it's so hot, and the traffic so relentlessly busy, but we decided to walk across town, past more gleaming shopping malls, smoke-filled temples, and so many food stalls that it made us wonder if anyone can ever cook at home. On our way, we passed through the infamous Patpong district – a very different prospect in daylight than it is at night. Most of the go-go bars were shut, although their graphic names gave a good hint of what nefarious activities go on in them after dark.

We were heading for a sundown drink at the Vertigo Bar – an open-air roof top bar on the 61st floor of the Banyan Tree Hotel. Unfortunately, we weren't quite prepared for the dress code – no shorts or flip flops – but they very kindly leant me a pair of trousers that would have fitted John Goodman, while Roseanne Barr had carefully donated a skirt that fitted twice around Tracy, and a tiny pair of shoes from the 70s, which scarcely covered two thirds of her feet.

So, we might not have won the fashion parade, but we'd got there early enough to get the best seats for the sunset, as Bangkok's infinitely-more-fashionable beautiful people trailed in behind us. It was amazing to be up at the top of one of the world's most spectacular skylines, as the bright orange sun began to set behind the smog on the horizon, and the skyline seemed to metamorphose as we moved from daylight, to twilight, to night time. If we lived here, we'd do this every night.