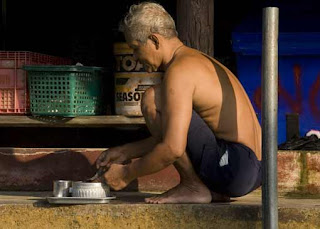 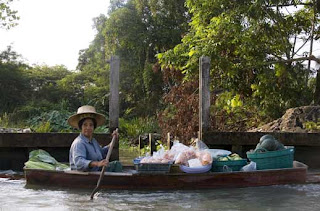 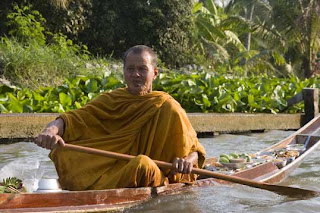 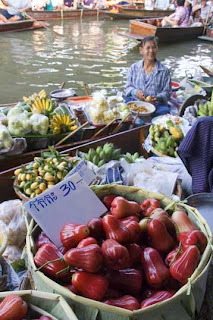 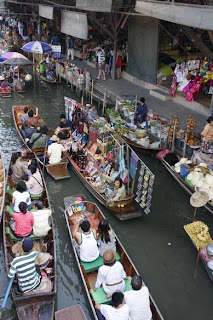 Today we had the chance to see a Bangkok experience that we hadn't done before – pay a visit to one of its colourful floating markets. There aren't any floating markets in the city any more, so we had to get up at the crack of dawn (5am!) to make the 110km trip out of town to the Damnoen Saduak Floating Market.

We started with an exhilarating ride on a long tail boat, down the canals towards the town – the long tail boat contains a noisy car engine that powers a high-speed rotor that can propel you at speeds up to 80 mph. As we powered along the canals through the coconut farms and jungle, you could see that this was a way of life made for living on the water – all the houses and shops opened up to the canals, and we passed lots of ordinary people paddling themselves into town in their canoes.

Whilst there are still a few genuine elements to the Floating Market, it was obvious that most things had been taken over by the tourist trade; but it was still an incredibly colourful and picturesque sight to see the market people selling their exotic fruit and veg from their boats, even if most of the customers these days were tourists. As ever, I was thinking if only I'd been here 20 years ago, before this place had been "discovered" – however, I was talking to one passenger who'd actually come to this same market 30 years ago, and she said that it was exactly the same then.

Yet another fascinating day.