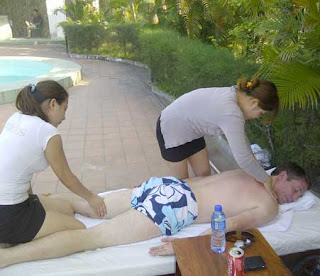 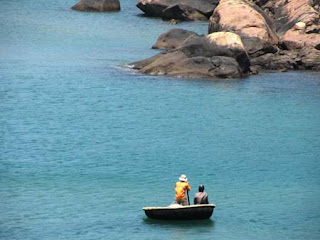 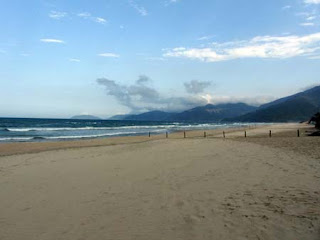 The port of Chan May in the centre of Vietnam is a jumping off point for trips to Hue and Hoi An, but seeing as we've visited both of them fairly recently, we thought we'd catch the Shuttle Bus into "town", to see what's in the local area.

The port itself is fairly in the middle of nowhere – it's a small, dusty industrial port for shipping out sand, so there's nothing much within 5 miles of the port itself. We were dropped off at the Lang Co Beach Resort which was on a fairly remote stretch of beach. While there wasn't much there, the setting was pretty good – a huge, almost deserted, windswept beach of white sand.

The resort was quite a big one, but it appeared to be virtually empty of customers, so the only people there were Silversea people, and the bored resort staff, plus a team of masseurs. Seeing as the masseurs had nothing to do, and a 45 minute massage was only $10, I thought I'd give it a go. The massage was by the pool, so it was all above board, although I did reject the girl's attention that I take my shorts off for the massage.

So, I lay there while 2 young Vietnamese ladies gave me a full massage in the open air, very glad that Tracy was sitting next to me to make sure that there were no hints of impropriety. A couple of the people who had massages after me had the girls literally climbing all over them and massaging their backs with their knees, but I think they realised that my pain threshold wasn't up to that, so thankfully, they were fairly gentle with me.

So, a very relaxing day in a very chilled out place – just what the doctor ordered.