March 8th – Code Alpha on the Way to Hong Kong 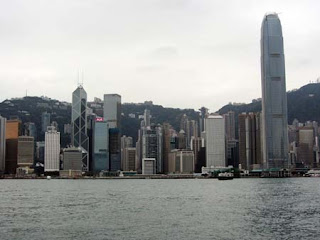 As we sailed to Hong Kong, I'd been feeling a little peculiar all day. My head had been banging all day, so I drank loads of water in an attempt to clear it. It turns out that this combined with an upset stomach was not a good idea.

That evening in the restaurant, I really began to feel strange, so rather than risk being sick at the table I got up to go back to our cabin. That's about the last thing I remember – when I came to, I was on the floor surrounded by the Captain, the Cruise Director, the Hotel Director, various other officers, countless waiting staff, the doctor, a stretcher team and a very worried Tracy. It appears that I had blacked out and a "Code Alpha" medical emergency signal had been broadcast around the ship.

I don't know which was worse – feeling like death warmed up, or the mortal embarrassment of passing out in front of pretty much the entire ship. Anyway, I came to fairly quickly, and was wheeled out of the restaurant in a wheel chair, feeling like a right idiot.