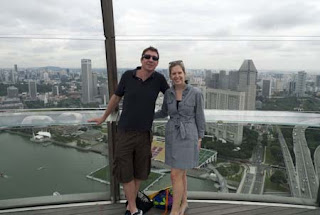 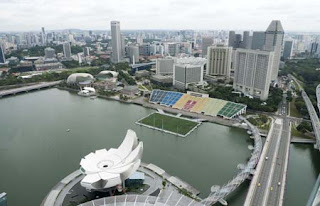 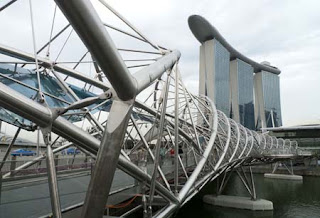 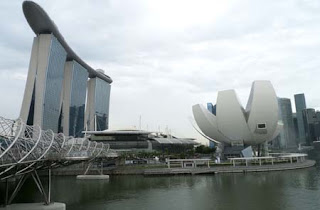 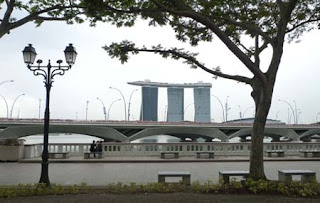 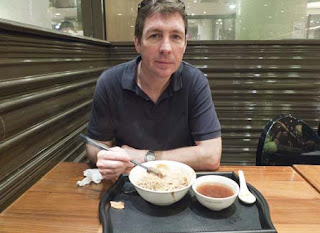 Since we were last in Singapore in 2010, this dynamic city state has been busy turning itself into a major gambling centre, in a bid to capture some of the rapidly expanding Chinese tourist market. As you'd expect of somewhere with as relentless a business focus as Singapore, they've been massively successful in this. So, in the past year and a half, Singapore has now overtaken Las Vegas in terms of money gambled (it's now second only to Macau in the world gambling league table).

Central to this, an enormous area of re-claimed land on the edge of the CBD is being turned into a gleaming holiday and gambling resort, with the distinctive design of the Marina Bay Sands complex being its showpiece building. The building consists of three adjacent skyscrapers topped with a boat-shaped structure that spans the three of them – with a hotel, a massive infinity pool and an observation deck up the top.

Our mission today was to explore this remarkable addition to Singapore's skyline.
So, we caught the super-efficient metro system to Marina Bay Sands, and emerged into one of the most luxurious shopping malls I've ever been to. I'd have thought that if there was one thing that Singapore didn't need, it was any more shopping malls; but the developers here obviously have confidence in the capacity of the locals and the tourists to spend ever large amounts of money on luxury goods.

As you walked around these sparklingly opulent new developments, there really were no indications that the world was in the grip of a global recession – Singapore seems to be doing very nicely on the back of the expanding Chinese economy. We bought our tickets and caught the lift up to the top, and emerged onto a wide viewing deck with some fabulous views over Singapore's impressive skyline. It was a cloudy day, so we couldn't see as far Indonesia, but the views over the expanding city below us were excellent.

From here, we walked along the impressive new Helix Bridge across the Singapore River which gave plenty of photo opportunities of the building we'd just scaled, and along the waterfront, there were more examples of the city's imaginative space-age buildings, interspersed with the odd colonial building to remind us of times gone by.

After this, we went on a trip to Orchard Road to visit the Tangs department store there, stopping on the way at a huge food court with a bewildering array of food stalls to choose from. Tracy's choice was the slimiest noodle dish ever, which was utterly impossible to eat with chopsticks as the noodles kept on sliding off – no wonder the Chinese are so slim.

On our way back to the ship, we stopped at the enormous Vivo City Mall next to the terminal – on a busy Saturday afternoon, it was absolutely packed with shoppers, and most particularly, packed with screaming kids who all seemed to be having simultaneous tantrums. For a non-shopper, it was my idea of hell, and even Tracy's shopping list got truncated pretty quickly when faced with this sensory overload.

Judging by the packed shops and the expanding skyline, Singapore is in pretty good health.