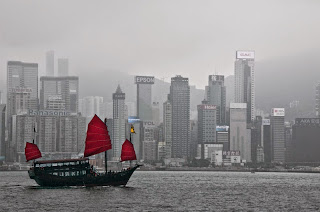 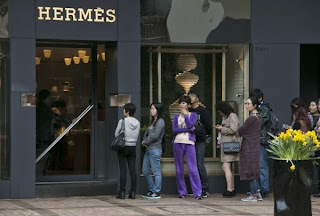 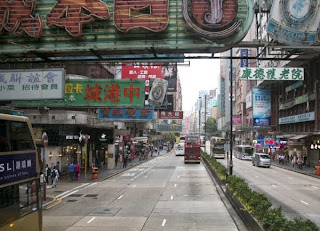 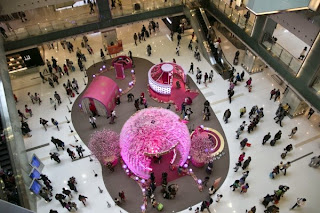 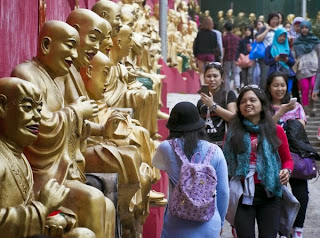 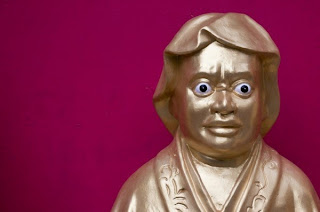 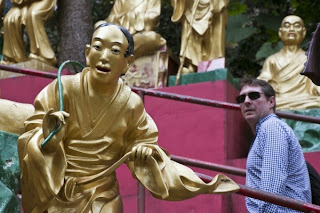 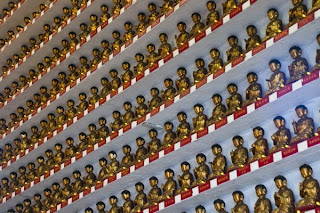 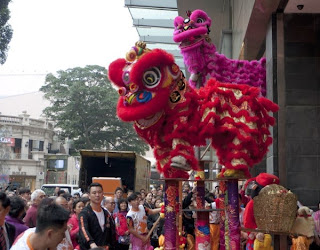 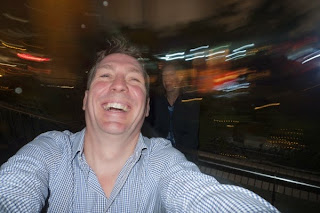 Hong Kong has always made its location work for it. First, as a base for the British opium trade to infiltrate China in the 19th century, and more recently as a place to ship out all the manufactured goods from China's factories. But, what's happening at the moment, is that the territory is getting over-run with megabucks shopping tourists from the Chinese Mainland, who are flocking here in their hundreds of thousands to snap up "bargains" in its huge malls. To be honest, there aren't many bargains to be had for us western tourists, but for the Chinese, where sales tax is above 40%, they can't get enough of Hong Kong's high end malls.

So, with the long weekend for Chinese New Year, I don't think that I've ever seen Hong Kong looking more packed. The malls were chock-a-block with shoppers who were willing to queue up in long lines outside Hermes and Prada to spend thousands of dollars on European handbags – the whole territory is in danger of becoming an unbelievable monument to consumerism and conspicuous consumption.

Just to prove to ourselves that Hong Kong still has some soul left, we decided to take the bus out to Sha Tin in the New Territories, to visit the 10,000 Buddha Temple, a temple that we've not been to before. As we got off the bus, we emerged into a huge mall that was almost as busy as the mall we'd left behind in Kowloon – although, being out here in the unfashionable New Territories, it was full of local shoppers rather than out-of-towners.

Tracy did her bit for the local economy by buying a new camera lens, and we then got down to the reason we were here – visiting the temple. Not as easy as you might think, seeing as it wasn't signposted; so, after a false start in a large temple which had the grand total of three Buddhas, we finally followed the crowds to the correct temple.

The temple swiftly lived up to its name, as we climbed a stairway lined with thousands of life-size Buddhas, in so many different reposes, states of enlightenment, states of baldness, hairiness, fatness, thinness, surprise, contentment etc etc. Actually, the temple should also have been called the Temple of 10,000 Tourists, because it was also thronged with people, although in this case, the majority of them were Filipina maids enjoying a cheap day out on their day off. This made it a lively and fun place to visit, and a nice way to get out of the commercialised atmosphere in Kowloon.

That evening we went for a lovely meal out at the Shangri-La Hotel – our first ever Michelin Starred restaurant!

The next day, we had a lot of jobs to do on the internet, so we spent the morning hunkered down on the wifi – our concentration only broken by the many noisy dragon dances being performed around Kowloon to welcome in the Chinese New Year. They were all very entertaining, although the clashing symbols do begin to give you a headache after a while.

At the end of our interneting, it was a case of if you can't beat them, join them, as we dived into the mall to do a bit of retail therapy ourselves (although at the other end of the scale from the moneybags mainlanders).

Finally, we went out in the evening to watch the Festival of Lights in which all the skyscrapers of Hong Kong Island are lit up with lasers and neon – sadly, it was more of a Festival of Fog, as the clouds obscured most of the show. So, we spent our time taking silly photos for Tracy's next photography class.

Every year I come to Hong Kong, it seems to get just a little bit more Chinese, and even more focused on shopping. I suppose that the Chinese authorities believe that shopping is the opium of the masses – as long as people have Prada, they might not care about the lack of democracy.