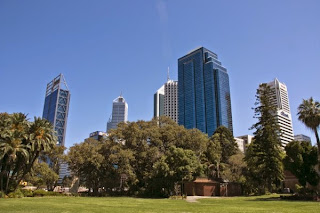 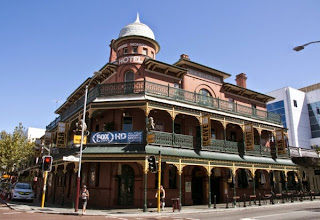 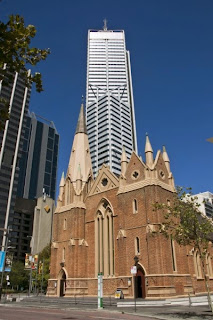 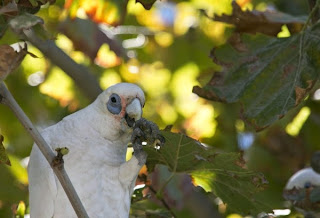 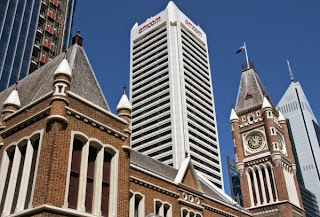 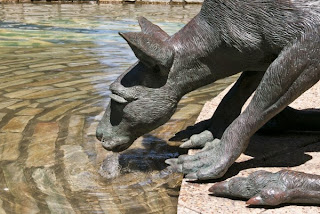 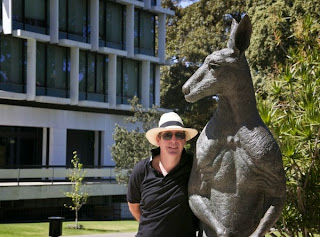 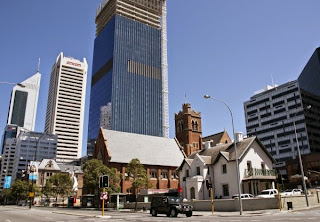 Perth on a blisteringly hot Sunday morning feels a bit like the morning after the night before. None of the shops open until 11, and the streets are virtually deserted before that.

When we got the train from Fremantle, the hordes of people getting off at Fremantle showed where everyone was heading, while as the train made its way up the coast, the beaches were already looking pretty busy. That meant that when we got to Perth, the town had a bit of the feel of Dawn of the Dead, no-one there, apart from the large number of homeless and drunk people lying around (we couldn't work out if Perth has more homeless people than the other Australian cities, or they just stood out more because there wasn't anyone else there).

Perth hasn't been as good at preserving its historic architecture as the other State Capitals, which, with all the skyscrapers that have shot up because of the state's mineral boom, means that the city centre has an overwhelmingly modern, if slightly characterless feel. The city's best feature has always been its waterfront on the wide Swan River, but unfortunately, most of that is undergoing a massive makeover, so consisted of a huge, ugly building site.

However, that did make the few attractive colonial buildings stand out even more in this sea of modernity – the oddest addition being the mock-Tudor London Court shopping mall, looking like it could have been transported en masse from London (or at least London from before the Great Fire).

By mid-day, as the temperature bordered on burning, there was some life on the streets, and the city felt like it was waking up, however, the overwhelming feeling was that downtown Perth just doesn't have the soul that Adelaide, Melbourne or Sydney have. However, this place isn't really about shopping or museums – it's about the beach and the great outdoors, two things that Perth (and particularly Fremantle) do pretty well.