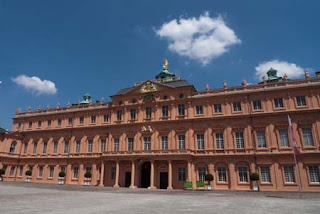 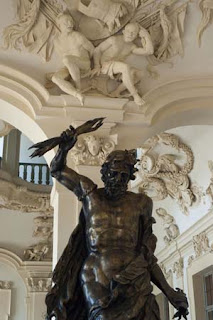 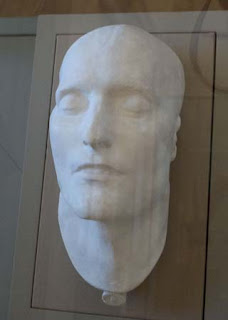 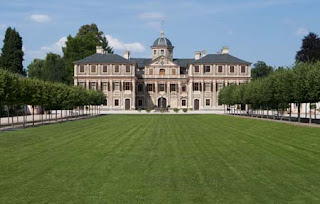 We found a very nice grassy site a few kilometres just outside Ratstatt, which seemed a good base for visiting both Ratstatt and Baden Baden. It was a lovely site with friendly staff, but the only annoyance was a bizarre rule that you can only put your rubbish in the locked away dustbins between 9 and 9.30am, and 5.30 and 6pm. How could this make any sense to them? Why do these German sites invent such ridiculous rules?

Anyway, we cycled into town to see Ratstatt's 18th century schloss – a sumptuous baroque "mini Versailles", colourfully painted in a jaunty bright peach shade. The out buildings of the palace feature a war museum full of weaponry, medals and uniforms that frustratingly had no signs in English, although the curator was keen to show us the death mask of Napoleon which he proudly told us is one of only 3 in the world. Having gone to such efforts to show us it, we did our best to look like we were incredibly impressed.

The palace was built by the Margrave Ludwig, who gained fame by defeating the Turks in a series of battles in Eastern Europe in the 1690s, in a time when it felt like the Turks were going to take over Europe.

The treasures that Ludwig looted from the Turks financed this slightly over-the-top palace, and he made sure that there were life-size statues of exotic-looking, but glum Turkish prisoners in chains, looking down forlornly from the walls of the otherwise cheerful banquet hall. He made sure everyone knew how successful a general he was.

After his death, Ludwig's grieving widow, the Margravine Augusta, built herself another new opulent palace in the countryside about 5km away, the slightly more modest Schloss Favorit, and she filled it with hugely expensive porcelain and crystal. Neither of our guided visits to the palaces were available in English – the first, of Ratstatt's Schloss was in German so we gleaned virtually nothing from our guide; so at Schloss Favorit we opted for French, and surprised ourselves at how much we understood. Our enthusiastic guide was keen for us to understand as much as possible, and kept directing her narration at us in particular, so we had to perfect the art of nodding sagely like we were getting every word of it, rather than the one word in five that we actually understood.