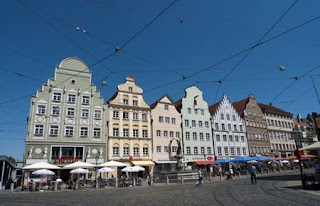 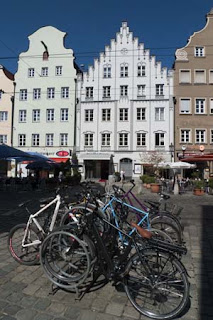 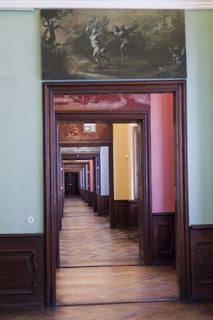 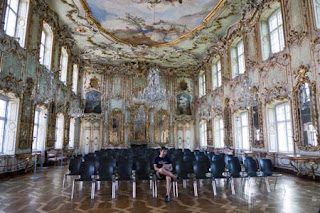 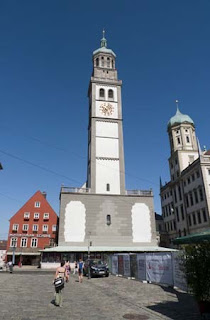 Augsberg doesn't have a campsite in town, so we stayed in a stellplatz by the side of the river. For a car park on the side of the road it was in a nice riverside location, although it did seem to attract quite a lot of people to sit by the river getting slowly drunk and singing ever louder songs into the night. Thankfully, once it got really dark the drunks moved on to sing elsewhere, so we had a quiet night's sleep.

Anyway, Augsburg's a really attractive town, full of grand renaissance buildings built in the days when this was once one of the financial capitals of Europe. An evocatively-named family called the Fuggers became massively rich lending to the great and good of Europe in the late middle ages, and they endowed their town with lots of splendid architecture for us to explore.

Unfortunately, in the 20th century, Augsburg was also the home to the Messerschmitt factories, which led to the city being pretty badly bombed in the Second World War; but the place seems to have bounced back pretty strongly, and nowadays it seems a fairly relaxed and prosperous town.

Aside from visiting an interesting art gallery in an amazingly ornate rococo palace, my chief mission was to find the town's international shop, because I have run into a culinary disaster – I have run out of marmite, which means that lunch will soon cease to be enjoyable to me. The excitement mounted when we finally found the shop after much searching, only for my hopes to be dashed when they said they'd run out of this ambrosia of the gods.

I fear that this trip around Germany may turn into a fruitless search for the Holy Grail that is marmite.