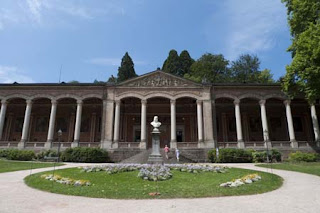 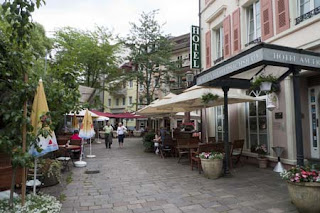 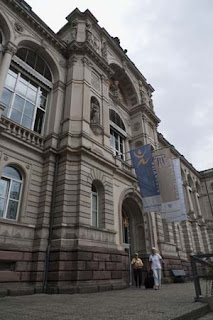 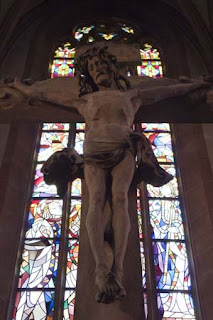 In Britain, Baden Baden's most famous because this is where the WAGs (Wives And Girlfriends) stayed during the 2006 World Cup. While their HABs were doing so badly on the pitch, they were having a great time in the designer boutiques, exclusive casinos and luxury spas of this supremely wealthy town.

The whole place just smells of money, as do the rich holidaymakers who are busily finding ways to spend their hard earned (or maybe ill-gotten) wealth. We saw lots of Arab ladies peering out behind their burkhas, lots of Russian families (apparently they're buying up most of the property in town), plus lots of old moneyed types carrying their little dogs around.

After a long 15 km cycle ride in, we arrived caked with sweat, so we didn't quite fit in with the beautifully turned out rich and famous around us. You have to have a jacket and tie to get into the casino to see the high rollers, while we were in scruffy shorts and t-shirts. So, instead of having a slap up lunch in the rows of expensive restaurants, we found a nice kebab shop in a side street to have a designer falafel and pitta sandwich.

We wandered around pretending we were rich, but we decided that it wasn't worth us forking out €29 euros on a spa pampering session when we were going to have to climb back on the bikes and cycle another 15km back. As it turned out, we were to get wet anyway, as 5 minutes into our trip the heavens opened and over the next hour we got progressively soaked to the very skin.

One thing about cycling in torrential rain is that it makes you ride quickly, so we sped along the cycle paths at top speed – in fact, it turned out to be quite an exhilarating and energising experience rather than miserable. I think we're almost ready for the Tour de France.