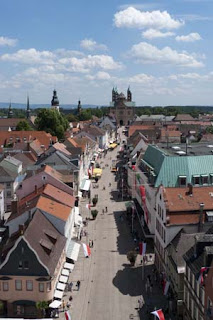 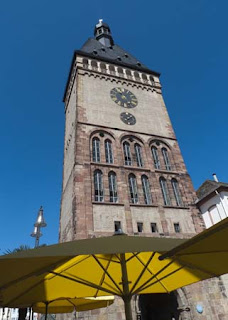 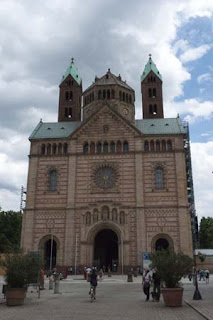 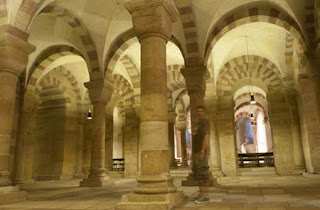 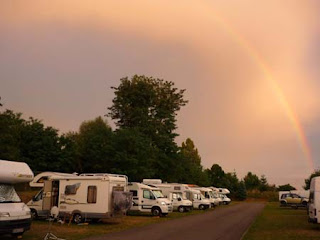 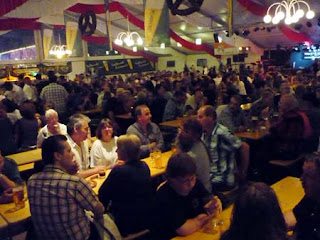 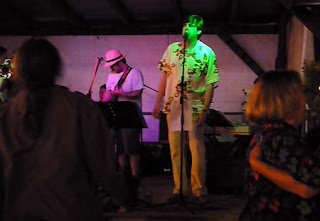 1. This is apparently the birthplace of the Pretzel.
2. This is the place where the term "Protestant" was first used.
3. Anyone of Jewish extraction called Shapiro, was probably originally from Speyer

We really liked Speyer (pronounced "spire" in German) – it's pretty (no destruction during the war), it's a manageable size (50,000 population), it's lively (on a sunny Saturday it has a great café culture), and it's got an interesting history (back in the Middle Ages it was an important Imperial capital on the Rhine with a thriving Jewish community).

After having an obligatory pretzel, we climbed up a medieval tower for some good views of the chocolate box town centre below us, then had a look around the magnificent Romanesque cathedral that houses the tombs of 5 Holy Roman Emperors. It's amazing to think that when the cathedral was built, it was the largest church in the western world – considering that the gothic arch hadn't been invented yet, it's enormously tall.

We then had a look around the remains of the medieval synagogue, with a well preserved subterranean mikvah (the pool for ablutions before worship), which was all that remains of the once-powerful Jewish community here. In the 1550s the Jews were hounded out of the city by frequent pograms, and although a new Jewish community established themselves here in the 19th century, most of them were eventually sent to Auschwitz after their synagogue had been burned to the ground by the Nazis on Kristallnacht.

On a happier note, it turned out that the home of the pretzel (confusingly named "bretzel" in Germany), was having a festival to celebrate the bretzel – Bretzelfest, which involved a huge funfair and lots of bands playing in the fairgrounds. So, with the sounds of 70s rock echoing across the campsite, we ventured into town to see what was going on.

Bretzelfest was excellent – loads of food stalls (with curiously enough, bretzels seeming to be the one foodstuff not on sale), lots of bars, tons of rides, and a really good atmosphere. As we sized up the different bands, we settled on one called "Bangers & Mash" playing a good mix of 80s hits – the tunes were good, the beer was flowing and the people watching was excellent.

This has turned out to be our favourite place so far.