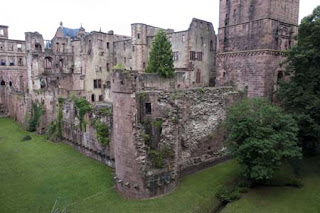 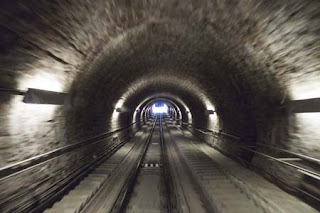 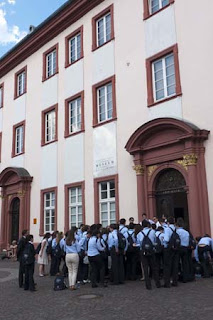 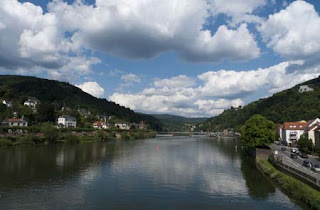 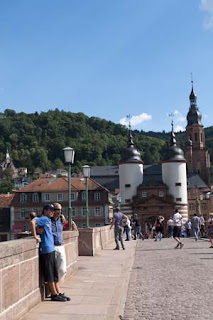 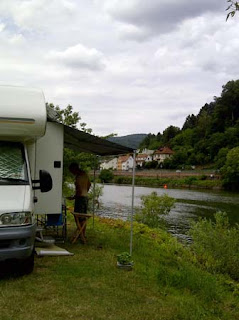 Heidelberg is renowned for being the most touristy town in Germany, and it certainly lived up to its promise – it was chockabloc with tourists from America, Britain, Spain, Japan, and virtually every nation apart from Germany (our German friends tell us they avoid it).

But, when you see its beautiful setting alongside the river Neckar, the ruined castle perched high on a hill overlooking the baroque town below it, you can see why so many people are attracted here – if you can zone out the hordes of other tourists, it's a lovely place.

Our campsite was in a beautiful location about 10 kms upriver – we were parked right on the river bank and felt slightly like zoo exhibits as the river boat cruises crept past, and the passengers got their binoculars out to have a good look at the strange campervanners.

In Heidelberg, because we were already hot and sweaty after our cycle in, we decided we'd save money on the funicular up to the schloss, by walking up instead. So, we virtually crawled at snail pace up the incredibly steep hill, and once we'd arrived at the very top, we were told that our entrance ticket would have included the price of the funicular anyway! We tried not to allow this annoyance to spoil the spectacular views over the historic town below us, and then we ventured into the castle. After pausing for the obligatory photostop next to the world's largest wine barrel (easily bigger than a double decker bus), we explored the huge complex of evocative red sandstone ruined buildings.

Having feasted our eyes for long enough, it was time to go back down into town again – obviously now that we knew that we'd paid for the funicular trip already, there was no debate about whether we should be healthy and walk, or be lazy and get the funicular.

The reason that the castle was ruined, was that it was attacked and virtually destroyed by the bothersome French in the 17th century, who also laid waste to most of the town – hence the fact that most of the buildings and churches in town were built in baroque style. We walked up its main street (reputedly the longest pedestrianised street in the world – I'm sure that in my lectures on Copenhagen, I say that they have the longest pedestrainised street in the world, but who cares?), with a constant accompaniment of fellow tourists. After quite a while of being in small, fairly untouristy towns, it felt a little strange to be with so many other travellers, but I suppose it's good preparation for our upcoming Baltic cruise in August.

So – the verdict on Heidelberg; undoubtedly beautiful, but if I came again, I'd probably come in May or September, not July.