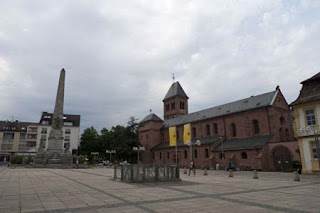 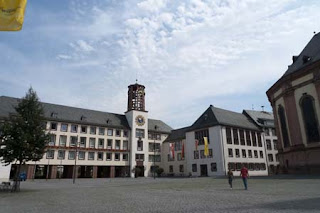 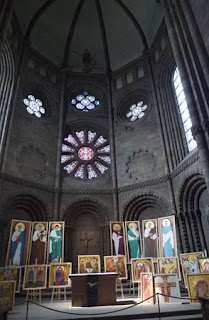 Every schoolboy who's studied the Reformation has sniggered about Martin Luther coming a cropper on a Diet of Worms, so this was our chance to see the town where the Reformation started.

It actually turns out that the correct pronunciation of the town disappointingly isn't like the wiggly worm, but instead is said to rhyme with "Forms". It also turns out that the 16th century, when this was an imperial city where the Diet (imperial parliament) met and decisions that shaped the world were made, was probably its highpoint. These days, apart from a few old buildings and the magnificent cathedral, Worms is a fairly non-descript modern town, with more than its fair share of discount shops and overwhelmingly populated by the people who these shops are aimed at.

As we wandered the characterless streets, and popped into the German versions of Poundland and Poundstretcher, you could think that maybe Luther wasn't too bothered about being thrown out of this town. Even the centrepiece of Worms, its mighty Romanesque cathedral was hemmed in by modern buildings, so it couldn't have the impact of other cathedrals of similar vintage, like Speyer's.

It was incredibly hot and muggy for most of the day, and then an enormous storm blew in, which took away the heat of the day – unbeknown to us, this was to usher in three weeks of fairly terrible weather that was to dog us for the rest
of the trip!