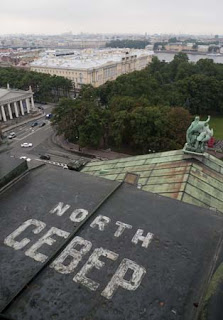 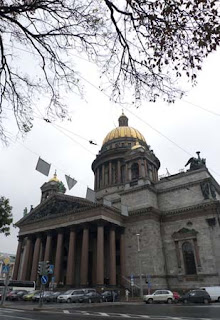 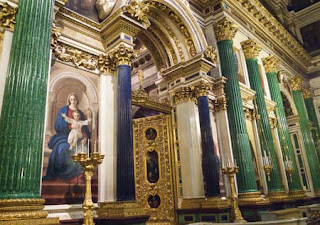 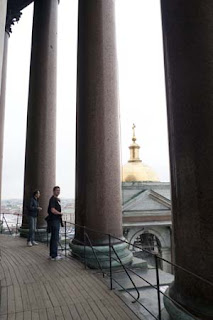 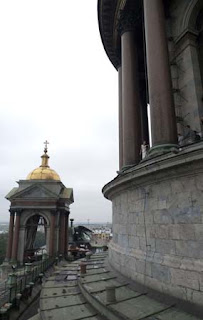 Today, we decided to get a different perspective on St Petersburg, by climbing the tall dome of St Isaac's Cathedral, the city's biggest and tallest church. The lavish interior of the cathedral was clearly designed to impress – huge paintings and mosaics, tons of marble, and colourful columns of malachite and lapis lazulai.

It must have been a disappointment to the Tsar that the dome itself is only the fourth largest church dome in the world, so he decreed that it should be covered in pure gold – over 200 kgs of it (and killing over 50 of the workers through mercury poisoning in the process). During the war, when the city was besieged for 900 days by the Nazis, the dome was painted grey, and the whole cathedral covered in huge netting to look like a park– green in summer, and white in winter.

So, we climbed up to the top to get a closer look at all the gold, and to get some great views over the imperial city below us. From up the top, you get to see how much of the city was built at a uniform height because of an imperial decree which said that no building could be taller than the Winter Palace (St Isaac's was obviously an exception), and you got to see how so many of the historic buildings seem to be decaying badly behind their magnificent facades.

But the strangest sight up there was a glamorous Russian Bride who'd tottered up the hundreds of steps in her high heals for that quintessential St Petersburg photocall, hanging off the dome. We had a sneaky look at her feet and they were glowing bright red.

Once we got to the bottom, we stopped for a surprisingly nice lunch in a little café, and then headed to the Hermitage, to continue our artistic tour around its many miles of corridors. Having queued for an hour and a half to get in last week, we'd worked out a sneaky way to get to the head of the queue quickly (I cannot divulge this naughty tactic for fear of being shot by the KGB), but our ruse worked and we were in a thrice.

The artistic highlight for us, was a part of the collection that had been stolen by the Red Army from a German industrialist called Otto Krebs as they invaded Germany. Krebs had collected a whole load of Renoirs, Cezannes and a Van Gogh, with our favourite probably being the captivating "Place de la Concorde", by Degas. Apparantly, this stellar collection lay hidden and rolled upin the Hermitage's vaults until the 1990s (up to that point, they denied its existence), and the Russians have resisted any attempts by the Germans to get it back – pointing to the fact that the Nazis destroyed so many of their palaces and artworks on their retreat from Russia.

Whatever the rights and wrongs of it, it was a little gem of a collection that could form a fantastic museum in its own right, rather than be just a little-visited adjunct to the main Hermitage collection. I wonder what else is hiding in the depths of the Hermitage?