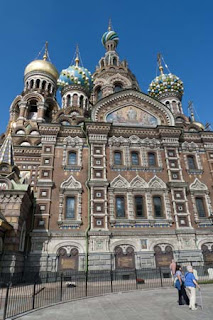 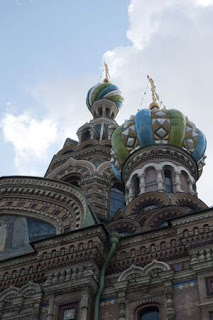 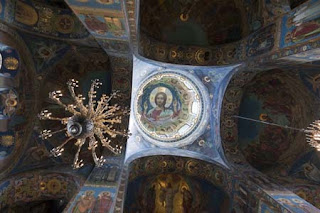 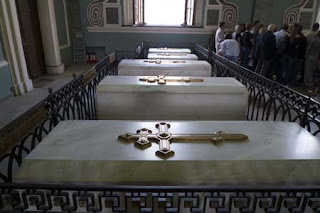 We could only get a double-entry visa for Russia, so for our third visit, the only way we could get off the ship was to go on tour – the tours are always excellent, so it's hardly a hardship. I went on the "St Petersburg Cathedrals" tour, taking us to the city's three cathedrals, which each tell a different aspect of the city's fascinating story.

Our first stop was at the monumental St Isaac's Cathedral – a 19th century Russian orthodox cathedral designed to look like one of the great cathedrals of the West. This cathedral is all about size – a huge cavernous space covered in marble and a soaring dome that declares to the world that Russia is a Great Power.

Our next Cathedral comes as a complete contrast to the Western style St Isaacs – the quintessentially Russian-looking Church of the Spilled Blood. With all its exotic onion domes decked with colourful decorations, and its glittering mosaics inside, it shows the split that was developing in Russia, as some looked to embrace its Russian heritage, after so many years of copying the West. The church stands on the exact spot where Tsar Alexander II was murdered by revolutionaries in 1881, as Russia began to get torn apart in revolutionary fervour.

Then, our final Cathedral was where it all started, the St Peter and St Paul Cathedral on the St Peter and Paul fortress, designed on the orders of Peter the Great to look deliberately un-Russian, looking like a Dutch Baroque church and topped with a huge needle-like spire covered in glittering gold. The Cathedral is the burial place for all the Romanov Dynasty, from the "Greats" (Peter himself, and the horse loving Catherine), to the less than great, like the last Tsar, Nicholas II, whose remains were finally laid to rest here in 1998, 80 odd years after his murder at the hands of the Bolshevics.

It's amazing how three different Cathedrals can tell the story of a city.