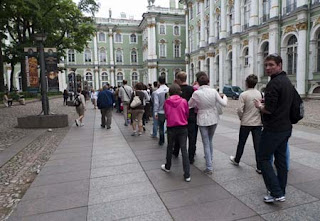 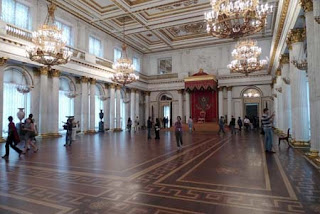 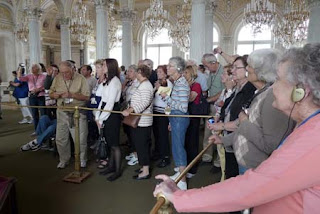 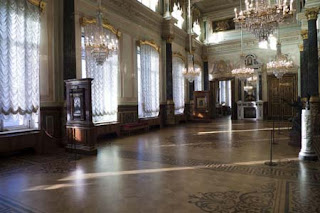 We've been to the Hermitage quite a few times, but we've never done it on our own – normally you're shepherded round its "greatest hits" on a fast-paced tour. One disadvantage of doing it on your own, is that: 1. The doors open an hour later to individuals than they do to the tours; and 2. You have to queue for a LONG time.

Of course, the Soviet times taught the Russians how to queue, but after over an hour's wait, we were already tired before we'd even got in. However, the freedom of being in this amazing building, able to explore at our own pace, gave us renewed energy. We walked along those endless corridors marvelling at the riches in here – sometimes we were swept along in the tide of tour groups, sometimes we went down side corridors off the main routes, to enjoy the Hermitage that most people don't get a chance to see.

But, sooner or later, you're drawn to the highlights where you have to elbow your way to see one of the two Leonardo Da Vincis (only 14 of his paintings have survived in the world), Raphaels, a Carravagio, more Titians than you could shake a stick at, and the world's greatest collection of Rembrandts. The collection of Roman and Greek sculpture would have made a world class museum in its own right, but here it was just a sideshow to the main event. The whole place was mind-blowing, and overwhelming.

To provide a contrast with the sublime artwork, we ate in the ridiculously bad Hermitage café. Two shriveled up tasteless sandwiches and two bottles of water for £12 – disgusting. This hardly fortified us for the onslaught of art, so after walking ourselves into cultural overload, we gave up and have saved the French impressionists and the Spanish masters for our next visit.

Once we'd staggered back to the ship, the tour department offered us the chance to escort the evening's tour, "Musical Evening at The Hermitage". Although we were exhausted, you don't turn a chance like this down – after the Hermitage was closed, we would be the only visitors allowed inside, so we'd have exclusive lingering views in front of artwork where we'd previously been elbowed and jostled by thousands of gawping, shouting, photo snapping tourists.

The contrast was amazing – this exclusive trip made us feel like VIPs – the kind of privileged access you think you'd only get if you were royalty or a President. If we were impressed by the Hermitage during the day, it was even better at night.

Then, to top it off, the 50 of us were treated to a fantastic concert by a 30-piece orchestra in one of the largest galleries; the stirring music echoing round the Canalettos and Goyas like a film score. It's an experience that makes you pinch yourself to make sure it's all real. Fantastic!