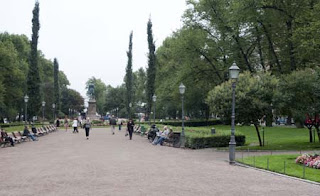 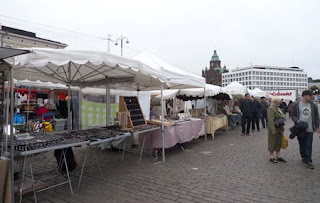 Having whizzed around the Finnish countryside on a moped last week, it was time to take to two wheels again, but this time at a slightly slower pace, using pedal power.

Helsinki's not a particularly hilly place but there's quite a few energy-sapping undulations along the way, as we laboured our way around the clean streets and cycle lanes of Helsinki. The thing that strikes you most about Helsinki, is how the countryside is such an integral part of the city, with so many lakes and parks dotting the green urban landscape.

The air was also refreshingly clean, which was just as well as we were gasping at times, as we made our climbs up the little hills – it wasn't quite the mountain section of the Tour de France, but it got the heart pumping.

Fortunately, we had a fairly stable group of cyclists today, and only one of us had an uncomfortably close encounter with a grass verge, as she veered off the cycle lane into the greenery.

It had looked like it was going to rain all the way round, but luckily it only started once we'd got back to the ship, which was a perfect excuse to rest our aching muscles for the afternoon.