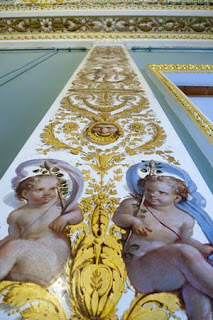 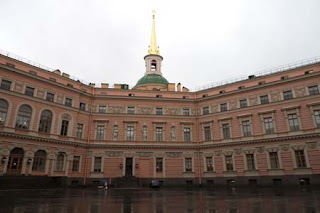 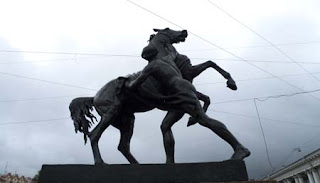 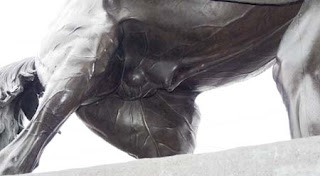 Rather than the continual grey skies and occasional shower that have dogged our time here in Russia, today the heavens totally opened, and it bucketed down pretty much the entire day. The downside of rain in St Petersburg is that all the large buildings have massive gutters that feed into huge pipes that just empty out straight onto the street (rather than into drains), turning the pavement into intermittent fast flowing streams to be jumped across, and resulting in soaked feet for the tourist.

We had grand plans to do a big trek across town to the Smolny Convent, but the monsoon put a stop to that, so instead we went to the Russian Museum, housed in the huge Mikaelovsky Palace. The Hermitage may be the best art museum in Russia (and possibly the world?), but curiously enough, it hardly has any Russian art in it. To see what Russia was up to, you have to head to the Russian Museum.

So, we squelched around the palace seeing how Western tastes changed the face of Russian art from eastern-looking icons, to the latest styles in French art. Perhaps the most interesting art was the stuff from Soviet times, as you see how the perspective of the artist was changing from reflecting the privileged world of the few, to that of the everyday worker – albeit with a heavily politicised pro-Communist view. Just as the Russian revolution had turned the world order upside down, the artistic world was also being revolutionised by the avant garde and movements like cubism, which were well represented in Russia.

With the rain looking like it was relenting (this proved to be a mirage), we moved onto the nearby Engineers Castle, built as an impenetrable fortress by the paranoid Tsar Pavel I, who was convinced he was going to be assassinated. As it happened, he was dead right, because he was indeed murdered, although it was within his own stronghold, and at the hands of his own bodyguards. The castle also turned out to be fairly impenetrable for us – just as we were about to pay the entrance fee, the attendant said, "I have to be honest with you, it's not really worth the money". So, we took her word for it and left. I wonder if anyone goes in there?

Finally, we wandered down the deluged Nevsky Prospekt to check out whether a saucy story we'd been told by one of the guides was true. Apparently, there's a set of bronze statues of 4 horses marking one of the bridges over the canal, and the artist had fallen out with the Tsar, and so registered a protest by secretly fashioning the genitals of one of the horses into the face of the Tsar. We must have made a strange sight, umbrellas in hand, we worked our way around the statues, staring up at the nether regions of each horse, carefully looking for a Tsar's face to be staring out at us.

It turns out that if you stare at the genitals of a bronze horse for long enough, you end up seeing all sorts of things – I'm sure I saw Elvis eating a hamburger on one, and there was one that you could just about convince yourself had the face of a man (possibly a Tsar) staring back at you.

So, having ticked this fantastic sight off our St P highlights list, we waded back to the ship through the growing torrents.