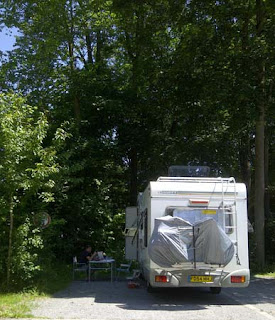 After our disastrous awning warning a couple of days ago, we now had to get a new awning to shelter us from the constant German rain, and maybe, just maybe, give us some shade from the German sun, if it ever appeared. We had arranged with a motorhome supplier in Rosenheim that promised they would have one shipped in for us by Tuesday.

For reasons that were never explained to us, it turned out that it didn't arrive on Tuesday as promised, so we decided to just go there on the Wednesday and wait till it arrived. When we got there, it appeared that this place hadn't ever heard of the famous German reputation of efficiency , and was a total organisational shambles, fronted by charmless salespeople who didn't care whether they'd promised things they couldn't deliver.

It turned out that the awning wouldn't be there on the Wednesday, nor on the Thursday which turned out to be a national holiday (there appear to be a lot of national holidays that coincide with the few days we actually want to achieve anything). So, we were forced to wait it out, and the nearest place to park up was a stellplatz (glorified carpark for motorhomes), in a place we'd never heard of (nor had the guidebooks) called Bad Aibling.

As car parks go, this one wasn't too bad, although shortly after arrival we were hit by an enormously vicious hailstorm that would have destroyed our awning if we had one. After the icestorm lifted, we cycled into town and sought out the tourist office to find out what there was to do in the area. Their reply was - 1. To go to the thermal baths that gave the town its name; and 2. Err – we can't think of anything else.

If you were a town whose one and only attraction was the baths that the town's named after (ie quite an obvious thing to do), would you really bother to have a tourist information office? Two people sitting there all day, telling people that there's nothing else to do here apart from have a swim seems a little excessive to me.

Anyway, we took their advice and went to the baths, which were indeed lovely and luxurious, but more importantly enabled us to use showers and toilets that weren't in the van.