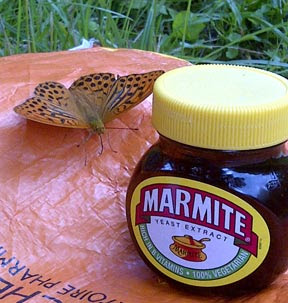 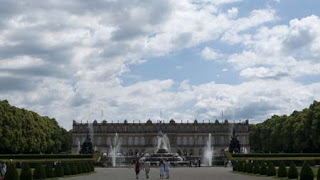 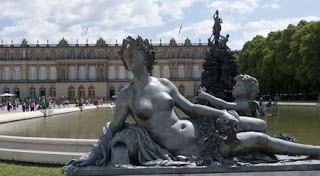 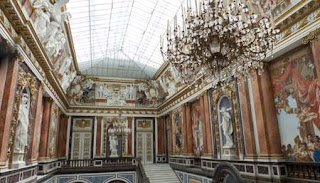 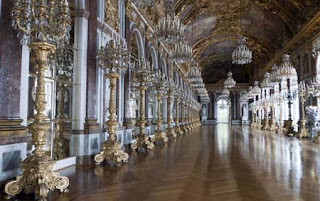 At last, some sun!

We drove across the bottom of Bavaria to the region's largest lake, the beautiful Chiemsee at the foot of the Bavarian alps – a favorite holiday area for Munichers today, and a retreat for Bavarian royalty from the past.

The main reason for our visit here was to see one of the fantastical castles of "Mad" King Ludwig, the tragic and deluded King of Bavaria who reigned from the 1860s to the 1880s. Ludwig was unfortunate enough to be on the throne during the time when Bismarck railroaded German unification under Prussian domination in 1871, which left the sensitive Ludwig a powerless King, pretty much in name only.

Ludwig might not have had much power, but he did have plenty of money (at least at the start), which meant that he could indulge his fantasies with ridiculous building projects that were eventually to bankrupt him. His most famous castle is the fairy-tale Gothic Neuschwanstein, which we hope to see later, but the castle that he built on an island in the Chiemsee was much more costly, much more lavish, and in many ways, much more ridiculous.

We caught the busy ferry from Prien to Herreninsel, a suitably isolated spot for the increasingly isolated, insular, anti-social and unhappy Ludwig to build his most ambitious project. Ludwig had been born and bred to be an absolute monarch, so being handed a role as a puppet King didn't really float his boat – his only outlet was to lose himself in ever more decadent building projects that would display his power and wealth. He'd become obsessed with perhaps the ultimate absolute monarch, Louis XIV of France, so he decided that he'd build himself a replica of Versailles on this little island. In fact, it wasn't to be a true replica, it was actually going to be bigger and even more opulent than the original (if that were possible).

Sadly (or perhaps fortunately) Ludwig only had time and money to build the central section of his new Versailles (supposedly costing in the region of £100 million in today's money), before he was declared bankrupt, deposed, and then died (in very mysterious circumstances); but what he left behind is an amazing and almost unbelievable tribute to one man's insane architectural ambition. Our tour took us round some of the most over-the-top rooms I've ever seen (trumping even the vanities of the Tsars in St Petersburg), literally dripping with gold, crystal and marble.

His own incredible Hall of Mirrors was actually longer than Versailles', but instead of being the scene of lavish balls, this one was just for him to enjoy on his own – he slept all day and got up at 8pm, so it took 40 servants half an hour to light the 2,000 candles to light the hall for the lonely Ludwig to wander around and contemplate his woes.

Only about a dozen rooms were finished, and at the end of the tour you emerge into the rest of the palace which was left just bare brick, looking as forlorn and unfulfilled as Ludwig's sad life. But, in spite of the poignant background story, it's a fascinating building to explore, and to hear all the stories behind it.

The rest of the island was beautiful too, so we had a picnic on Ludwig's lawns, only bothered by colourful butterflies, before we headed back on the ferry to Prien pondering if there will ever be someone like "Mad" King Ludwig again?