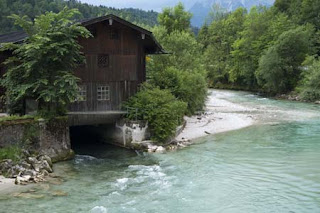 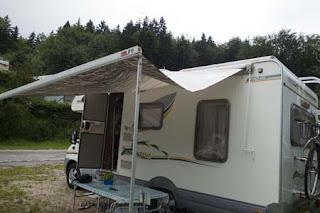 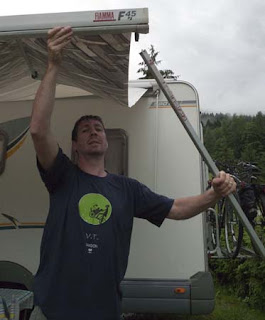 With the weather looking like it was improving, we headed over the German border and up into the mountains to the beautiful Berchtesgaden, an incredibly beautiful part of the world, surrounded by snow-covered peaks and cut through with icy, fast-flowing rivers. The views from our camp site were awesome.

On our first day, we decided to enjoy the beautiful weather and do the 30 minute walk into town. As we neared town we spotted some ominous black clouds hanging over the mountains in the distance - but they were miles away, so no need to worry.

As we got into town, the thunder and lightning started, and now the storm wasn't in the distance any more, it was just ahead of us. At this point, most sane people would decide to find a café, see if the storm passed, and call a taxi if it didn't. Not us, we decided we could outrun the storm, so armed only with Tracy's puny sun-umbrella we headed back to the campsite.

Five minutes into the walk, the heavens opened and a storm of biblical proportions hit us. They say that there's no such thing as bad weather, just bad clothes – I think that wearing a T-shirt, shorts and flip flops in an incredibly powerful rainstorm counts as bad clothes. As the sky turned black, we were literally soaked to the skin by enormous drops of rain that were firing sideways at us like bullets.

Eventually, the dripping drowned rats made it up to the campsite to be greeted by the joyful site of our van with the awning utterly collapsed by the weight of water and the strength of the wind. On closer inspection, the metal struts of the awning had sheered apart in three places – it was totally broken. In fact, it wouldn't retract any more, so we couldn't even drive with it.

Somehow we managed to get the awning off, and now it's a case of sorting it out with the insurance company and trying to find someone to put a new one on, in a country where we don't speak a word of their language this may not be easy.