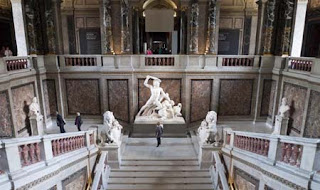 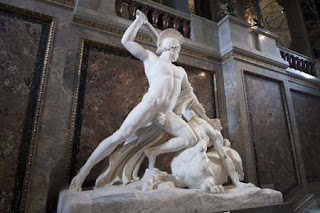 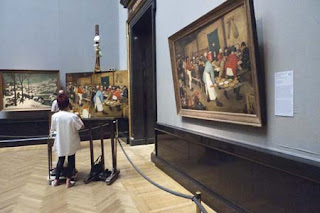 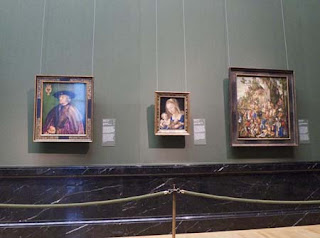 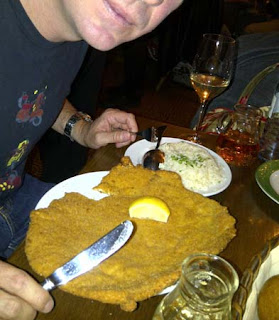 We've been to Vienna before, but that was before Tracy became an art buff, so this was a chance to sample some of the amazing art on offer at the Kunsthistoriches Museum – the main collection of the Habsburg Empire. Quite how we could have come to Vienna before and not come here I don't know, because this place was amazing.

We were in here for 6 hours and still didn't see anything like all it had to offer; but at least it gave Tracy a chance to study Durer's "Madonna with the Pear", which her next essay is going to be on.

Our ability to soak up any more culture was now up to its limit, so it was good to have to go to meet Sally and Dave who had flown over to meet up with us. We stopped for a couple of drinks and a massive catch up, and then went on to Vienna's most famous Wiener Schnitzel restaurant to sample the city's trademark dish. Unfortunately, if it wasn't meat and it wasn't breaded and deep-fried, they didn't do it here, so for a health-conscious vegetarian like Tracy the choice wasn't great, so she had to settle for a potato soup. The schnitzel itself wasn't the most tasty thing in the world, although it was huge – hanging over the edge of the plate – but it quickly began to feel like a "man versus food" eating challenge rather than a gourmet experience.

With the Wiener Schnitzel ticked off the list, our next typical city dish to be ticked off was the Sacher Torte – hopefully a bit nicer.