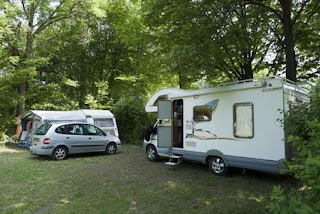 It's been a while since Tracy had one of her customary rows with an overly officious campsite person, but today she managed to have two. At Munich, they didn't like the fact that we'd parked up in a place supposedly reserved for caravans not campervans. When she pointed out to him that he hadn't made it clear where we were supposed to go, he went mad.

As he raved away, Tracy asked him not to shout at her – "I'M NOT SHOUTING", he bellowed incandescently, "I JUST HAVE A VERY LOUD VOICE". If he gets this angry with uncompliant campers at the start of the summer, I dread to think what volume he'll be at by the end of the Oktoberfest.

Then we headed to Regensburg, to a very nice but officious campsite, where they won't let you in if you turn up in "quiet time", between 1 and 3pm. When we were finally allowed across the threshold, he said "we have a problem with your campervan, the door is on the wrong side". Eh? No campsite's ever said that before. Why don't we reverse in, so that our door is on the "right" side? "Is not possible", came the unbending answer.

So he walked us to a leper's colony, well away from the neatly lined up other campervans with their doors all perfectly aligned, and Tracy asked him, why they had this rule. Well, this lit the fuse of the OCD campfuhrer, who went mad – "IS NOT POSSIBLE! IS NOT POSSIBLE!", plus lots of other stuff we (probably fortunately) couldn't understand.

As it turned out, the place we were assigned was much nicer, although of course we did park the van in the most deliberately wonky alignment to upset Herr Rainman.