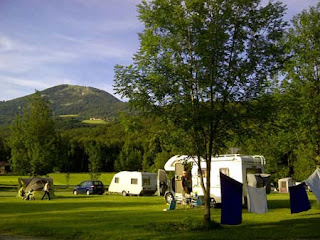 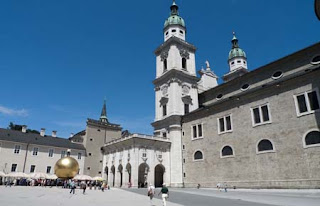 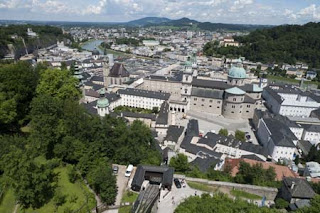 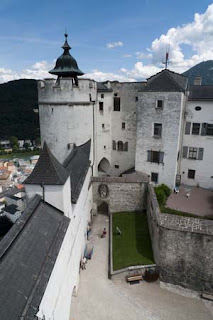 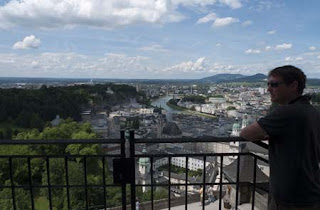 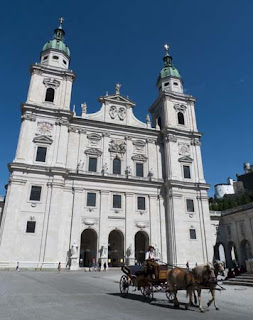 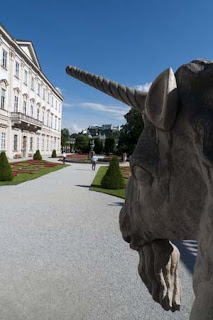 I last came to Salzburg when I was inter-railing at the age of 18. In the evening, there was a "boat race" drinking competition in the hostel we were staying at, and the night ended up with a rather unfortunate incident with a Wiener Schnitzel, so my memories of the place are rather hazy. I have vowed to avoid boat races and shnitzels for my visit 23 years later.

This time, our campsite just outside Salzburg was in a beautiful location, at the foot of some steep hills, surrounded by luscious green meadows, straight out of The Sound of Music. We arrived there on a glorious sunny afternoon, but we were soon to find out why those meadows were so green – it rained pretty much non-stop for the next two days.

Fortunately, we both had work to do, so we got used to the constant sound of rain hammering down on our roof, and the drip, drip, drip of water cascading off our awning, as we tapped away on our laptops.

But, when the rain finally did lift and the sun re-emerged again, the long build up made Salzburg seem even better – it's a stunning town. Unfortunately, the place is fairly overrun with tourists – and this is June, I dread to think what the place is like in August – but even the tour groups can't take away from the elegance of the baroque town centre.

We took the funicular up to the imposing medieval Schloss sitting on a high outcrop overlooking the town and the Salzbach river down below it – the bishops who ruled the town grew rich on controlling the medieval salt trade; and so this huge castle was a powerful statement of independence, and an insurance policy in case they got attacked. The views they had of the land they ruled are breathtaking.

We then wandered the old town's quaint streets, stopping at a few baroque churches and passing by the house that Mozart was born in – it wasn't hard to spot which house it was, seeing as there were about 5 tour groups milling around in the street in front of it.

Of course, Salzburg wasn't just the musical inspiration to Mozart – Rogers and Hammerstein's Sound of Music was set in and around the city, so if you're really inclined, you can go on a Sound of Music tour around the sites associated with the film. We resisted that temptation of the kitsch, and just tunelessly hummed "Doh a deer" to ourselves as we cycled to Schloss Mirabel, the setting for the Von Trapp family house. In fact, even though I must have watched it loads of times in my youth, it appears that I don't really remember much of the film, because I can't remember any of the scenes that the guide book tells me were set in the Schloss's garden. Never mind, they're very pretty gardens anyway.