May 28th – Rain, Beer and Meat in Munich 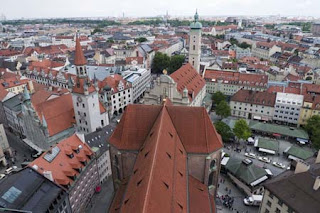 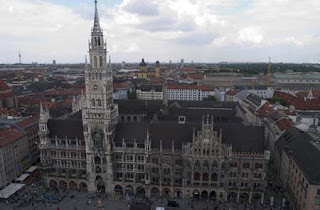 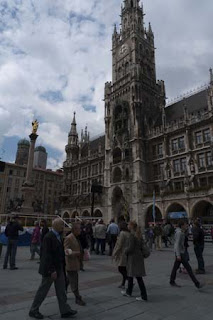 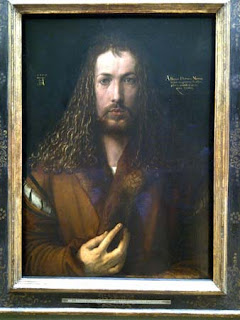 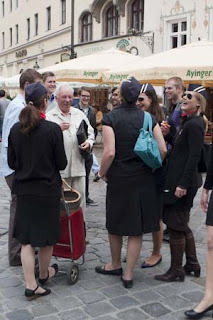 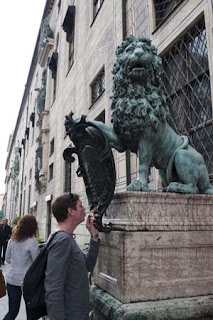 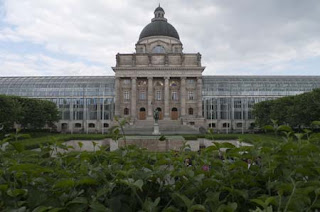 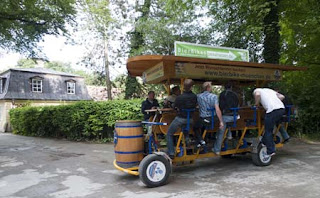 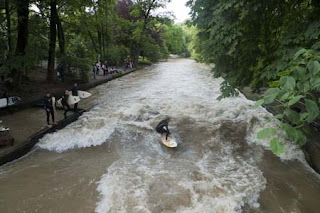 Our plan for this trip was to head down south to Bavaria as quickly as possible to get some good weather – however, constant torrential rain once we got there, wasn't quite what we had in mind. So, after a week of glorious weather on the Rhine, we hit a rain-soaked Munich.

Fortunately, a little sun was shone into our lives by the arrival of Ade and Lucie, who gave us a good excuse to head for Munich's famous beer halls. However, before they arrived we headed for Munich's fabulous art gallery (more research for Tracy), where there was an unbelievable amount of high quality art– Van der Weydens, Albrecht Durers, a da Vinci, and more Rubens than you could shake a stick at. If it seemed way more than you'd expect for a provincial city, you had to remember that all this art was assembled when Bavaria was a rich duchy, and then kingdom, in its own right.

So, that was the culture done for the weekend, now it was time for a little hedonism. We met Ade and Lucie sheltering outside the enormous Hacker Pschorr beerhouse, so we had no alternative but to go in there and sample their wares. When I was 18, my local pub (the infamous Railway Tavern) used to serve Hacker, and we'd only dare drink it if we were on a serious session, but here the whole of Munich was crammed in, trying to tuck as much down them as the could – you had to join in.

The food was great too – as long as you liked sausages or enormous amounts of roast pig, which didn't really excite Tracy. Added to this, Ade delighted in informing us that, unbeknownst to us, Germany was in the grip of a huge E-coli outbreak, that was almost certainly caused by infected salad. Fortunately, Bavarian food is almost entirely meat-based (with some added sauerkraut for the ladies), so it hadn't hit down here.

Once we'd stumbled out of the Hacker house, the rain had cleared enough for us to do a tour of the city centre – the old city was built on a grand and monumental scale, and today the whole place seems very well off and comfortable. Climbing Munich's steepest church tower for a bird's eye view over the city after a few Hackers probably didn't make much sense, but it meant we sweated out a pint or two.

After walking through enormous churches and palaces, the weather was improving and we were inexorably attracted to the Englischer Garten, a lovely park that features a huge beer garden in the shadow of a Chinese tower, all to the background music of suitably clichéd oompah music played by the resident brass band. It was enough to inspire the countless stag parties, hen do's, tourists and locals (of all ages) to get slowly sozzled on enormous steins of lager and weissbeer in the afternoon sun. Everyone seemed really jolly – it made us reflect that if you had several hundred Brits in a garden with all this booze, it would either end up in a fight, or it would just be the preserve of the under 25s, while here it seemed really inclusive.

In Munich, they even manage to combine exercise with drinking - ten man bikes cycling a mobile bar around the park (I hope the barman was steering). Also in the park, we came across an unexpected activity in this landlocked state - surfing. Eager surf dudes flock to a point where the river has been narrowed to create a mini wave which they crab up and down for a few seconds before being flung off, and it's another person's turn.

For our evening activities, we went for a radically different plan, by heading to the Augustiner Beerhall (apparently one of the oldest in Munich), for some lager and the unavoidable plates of meat, before heading to the infamous Hofbrauhaus, just to say we'd gone there. The Hofbrauhaus is impressively huge, full of tourists, and by this time of a Saturday night, completely drunken. It was quite a sight to see, but not somewhere I'd hurry back to – impersonal service while listening to groups of Spanish students sing drinking songs, with scarcely a local in sight.

Anyway, we'd drunk enough by then, so it was time to get the U-bahn back to the campsite on possibly the most inebriated subway train I've ever been on (and incredibly enough we were some of the most sober people on it).